West Kirby volunteers embark on a marathon mission, to rescue 27 people in one day. 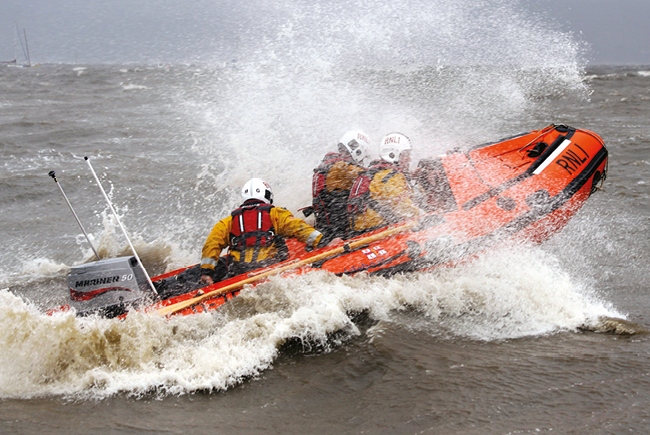 Mike Warburton, Helm at West Kirby, was near the station one February afternoon when he spotted a group of people walking to Little Eye, a nearby island that can be reached on foot at low tide. ’There was a big spring tide that day, which comes in faster than usual,’ remembers Mike. ‘I just put two and two together and called the lifeboat operations manager to warn him there could be a shout.’ Mike went to the station to prepare the lifeboat and, sure enough, someone called 999. The tide had left several people stranded.

The lifeboat crew motored to Little Eye in their D class lifeboat Seahorse. When they arrived, they found 11 cold and wet people – some verging on hypothermia. ‘It was a nice day so most people were wearing light clothing,’ says Mike. ‘But the islands are quite exposed and the wind chill kicked in.’ The crew took seven of the casualties (four adults and three children) to shore where they were warmed up, dried off and assessed by paramedics.

‘As we returned to Little Eye for the remaining people, we got a call to search for two sea kayakers who were reported as being in distress near Middle Eye Island,’ he says. This took priority and, thankfully, the they quickly found the kayakers safe and well before heading back to Little Eye. The crew helped the rest of the walkers into the lifeboat. ‘There was a southerly wind,’ recalls Mike. ‘And the trip back was into the surf – so getting back to the mainland was rough!’

After dropping the remaining four to safety, the crew had yet another call. They immediately headed for Hilbre Island, where more walkers were stranded by the tide. They took five children and two adults back to shore before returning for the second group, which included two damp dogs.

It had been a busy afternoon for the volunteers, rescuing 27 people and 2 dogs. And, thanks to the crew’s swift intervention, no one was hurt.

Your donations help fund the kit our crews rely on. Mike says: ‘Without the lifejackets and survival blankets for the people we rescued, they would have been in a much worse state. And of course, we couldn’t have done it without our lifeboat, which was donated by an incredibly generous supporter who left it in her Will.’

Your gift, no matter how big or small, will a huge difference to saving lives.

Find out how to write or update your Will, or request our free Gifts in Wills guide here

Charity of the month

Over 55? Have your Will written or updated for free this month. And after you’ve looked after your loved ones, please consider leaving a gift in your Will to the RNLI.