A walk around Dinas Head, Wales

A circular walk around an 'island' on the north Pembrokeshire Coast Path. 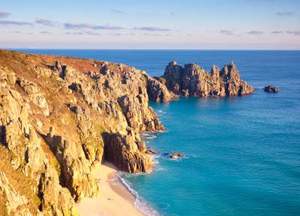 Situated between Fishguard to the west and Newport to the east, on the north Pembrokeshire coast, Dinas Head offers dramatic scenery in a short circular route.

This walk will take no more than a couple of hours, and is about 3 miles long, though you can extend this into the countryside or along the Pembrokeshire Coast Path.

Known as Dinas Island, the headland is only joined to the mainland by a narrow strip, a valley carved in the Ice Age by glacial meltwater. It includes the highest point on the Coast Path, so there are wonderful views on a clear day.

Pembrokeshire Coastal Bus Services cover the whole length of the national park, so you can access anywhere along the Coast Path for a short walk. Look out for their puffin logo and buses decorated with wildlife pictures.

Arrive at Pwllgwaelod on the Poppit Rocket bus, or use the free car park near the Old Sailors inn. The old pub next door was one of the many watering holes visited by Dylan Thomas. There are public loos by the car park.

The beach is covered in pewter coloured sand and is well used by boats. From the beach, follow the path to the left of the pub up the hill.

The path goes up and down, and the climb is steep in parts. On a clear day there are great views of the coast facing the Irish Sea, with pyramid shaped rocks and Fishguard beyond. The majority of the route is clearly defined, but take care not to wander off the edge!

You'll pass fields of sheep on the island, many varieties of wildflower, and sea birds on the coastal side.

When you reach the marker, you'll be standing 142 metres or 465 feet above sea level.

As you descend you can see the coast on the other side of the island, towards Newport.

When you begin walking through woodland, you are nearing Cwm yr Eglwys. As you walk round the back of the houses the picturesque hamlet will come into view, framed by lush trees and bright flowers thanks to its micro climate.

Overlooking the clean, sandy beach is the belfry and part of the west wall of a 12th century church, all that remains since it was destroyed by a great storm in 1859. Along with St. Brynach's Church, 114 ships along the Welsh coast were wrecked that October. Another storm hit the usually sheltered bay in 1979. Now the ruins and churchyard make for a romantic backdrop to the beach.

On a practical note there are public loos, and possibly an ice cream van on a fine day. Though tiny and peaceful, the beach is lively in summer.

To return to Pwllgwaelod, head for the caravan park and cross through it to reach the path. This is flat and gravelly with benches at regular intervals. It's suitable for wheelchairs. There's not much to see as you walk along the bottom of the valley that separates Dinas Head from the mainland, apart from irises, dense trees and other greenery.

You'll come out at the Old Sailors inn, where you can enjoy a well earned pint of Double Dragon ale, a seafood snack or a cream tea, in the beer garden overlooking the beach. Check opening times though, if you're planning a visit, because they can change. It's closed on Mondays.

If you fancy a post-prandial stroll there's a little artist's gallery and a blacksmith in nearby Dinas Cross village, along with a couple of convenience stores and pubs. Or you can of course continue along the Coast Path in either direction.

You can also walk the route in reverse. There is limited car parking at Cwm yr Eglwys, for a small charge during high season.

What's your favourite walk? You can share it in the 50connect Forum.