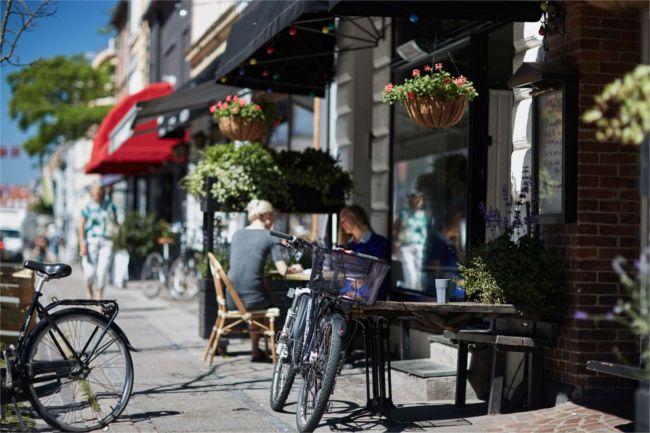 Denmark is always up there at the top of the Global Happiness Leagues. But Aarhus, as the City of Smiles, seems even happier and more laid-back than your average Danish city.

Aarhus is Denmark’s Oxford, 20% of its population are students. They look back to cobbled and timbered historic eras but also to the future. The Latin Quarter is full of artisan shops, quirky coffee shops and creative start-ups. Suddenly Aarhus, after being a European Capital of Culture in 2017, is the place to visit.

As soon as you arrive at the airport buy an Aarhus Card. It will pay for your bus transfer to the city centre, cover subsequent bus travel, grant admission to many attractions and museums as well as providing walking tours too.

The stylish Oasia Hotel, within three-minutes walk of the airport bus drop-off point, is a serene base for exploring Aarhus. This boutique design hotel, providing an extensive breakfast buffet, is quiet and relaxing with its Scandi-chic white minimalist design. 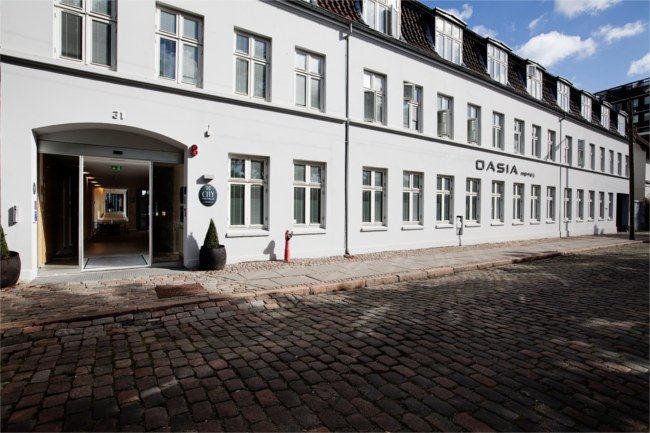 Begin your exploration of Denmark’s second city at ARoS, Aarhus’ art museum. The top floor is a 360 degree glass walkway that helps you to orientate yourself to Aarhus’ geography through the colours of the rainbow. Take your pick of the museum’s galleries as you descend to ground level.

Aarhus is compact and it is just a short walk to Den Gamle By, again covered by your Aarhus Card. It’s a collection of villages showing Danish history at three points in time. Walk the cobbles or take a horse drawn carriage to watch craftsmen using the carpentry, chandlery and paint-making skulls of 1864. Vehicles and buildings from 1927 are fair historical game too. But for those of us over 50, entering a 1974 shop selling brands such as Ajax and playing “Raindrops keep falling on my head”, it all seems worryingly like yesterday to be true history.

The Danes are Europe’s top coffee drinkers and you can take your choice of numerous coffee-shops: one provides board-games galore, there’s a Shisha cafe and another has a range of vinyl records for you to choose your own background music. If Paul Hollywood dropped by, he would constantly be handing out handshakes for the exquisite quality of Danish Pastries.

Aarhus is bike town. Slot a 20 Kroner coin, as a deposit, into a bike holder and release the freedom of the city’s cycleways and it’s forest tracks too. Masses of bikes, plenty of buses and a determination to bring surrounding forest land into the city keep Aarhus green and pleasant.

Your Aarhus Card almost gives you too many choices. The Woman’s Museum is totally interactive. Currently it’s Gender Blender exhibition invites visitors to install their own exhibits, scrawl graffiti on the walls and take part in surveys. Or there’s Europe’s largest Prison Exhibition. Then there’s Aarhus’s Tivoli Gardens, a hugely successful combo of rides, restaurants and immaculate gardens. 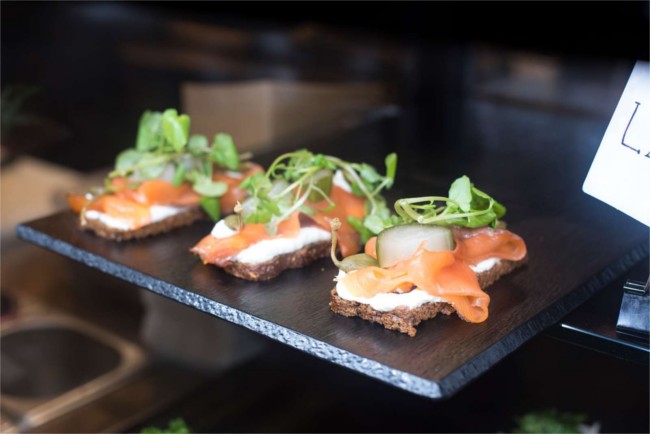 The Beach Chef is an original and free experience. On summer weekdays a chef shows people how to forage along the shoreline for shellfish and edible seaweed before moving onto preparation and cooking.

Scandinavian countries have a reputation for a high-cost of living but Aarhus has the Central Food Market and the Street Food Market providing tasty bargains. The Street Food Market, based in the old bus station, has 30 stalls selling drinks and food from all over the world. Every stall is encouraged to offer at least one dish at 50 Danish Kroner. An American burger or Caribbean Stew or Danish Tapas tray or Indian Curry or Thai pad at just over £6 means that visitors can eat economically.

Take a bus out to the Moesgaard Museum built into the hills, like a gigantic futuristic wedge, overlooking the sea. Undoubtedly, it’s prized exhibit is Grauballe Man, probably a human sacrifice to the Gods from three centuries BC, with the bog preserving his body until it was discovered in 1952. The museum opened in 2015 and it uses state-of-the-art technology to make you feel part of a marauding Viking force. 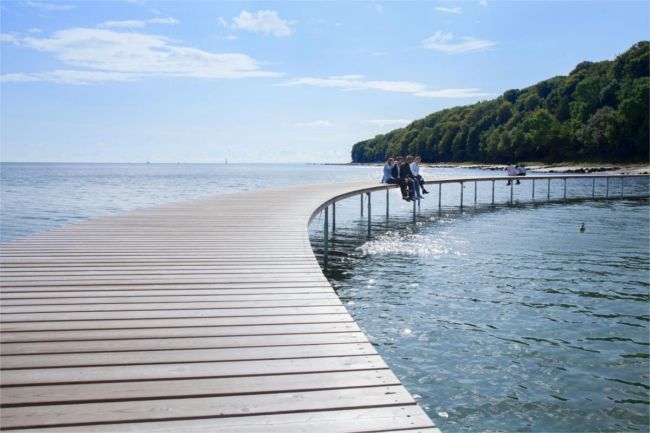 Although it is a small city Aarhus offers too much for a mere weekend break, particularly if your visit coincides with July’s annual Jazz Festival or August’s Aarhus Festival. Schedule three or four days so that you get the time to walk along Aarhus’s Infinity Bridge and spend some time savouring you Danish Open Sandwiches.

A 72 Aarhus hour card https://www.visitaarhus.com/ln-int/denmark/see-more-pay-less/enjoy-aarhus-with-an-aarhuscard costs 599 Danish Kroner while 120 hours is 749 DK. You can buy these online before you travel or at the airport.

A double room, including breakfast buffet, begins at around £150 at the Oasia Hotel.