Inspirational couple, David and Veronica, tell us about life on the open road 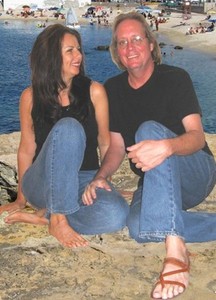 American couple, David and Veronica are the duo behind the GypsyNesters, if you haven't seen their site yet, check it out, it's awesome! If you're starting to think about retiring and wondering what to do, then take a leaf out of this couples book – the world is literally their oyster as they travel the world blogging about their experiences. They turned an empty nest into a very fulfilling life!

We had a quick chat with the couple to hear all about their days on the road, why they do what they do and what advice they'd offer to someone thinking about making a life change. GypsyNesters – we salute you!

When and why did you start travelling?

David: As a child. My parents were pretty good about taking us places, especially my dad. As a geologist he brought me along on interesting field trips, volcanoes in Hawaii, formations and ruins in the Yucatan, Yellowstone... stuff like that. We tried to do the same for our kids, taking them along as much as we could, to Europe, the Caribbean, Canada, Mexico and all over the states. As an adult I have been a touring musician for over 30 years so that has taken me to more than twenty countries and all 50 states. Once our kids were grown, I wanted to share those places, plus new ones, with Veronica.

Veronica: Travel had always been a part of our family's life – our expendable income always went toward a trip. David and I thought it very important to expose our kids to travel and it has paid off for them. The girls are currently planning a trip to Spain in the fall and The Boy just got back from Africa where he spent a few months camping and hitchhiking. Travel expands horizons; there's a reason people leave home “to find themselves.”

I have to watch myself because I'm a homebody at heart. I easily get closed off and can't see past the social, political and moral climates of my immediate surroundings. Being in a state of constant travel opens me up beyond myself.

What was your ‘day job’ before you became a gypsynester?

David: I have worked in the music business since I was 18, mostly as a bassist, guitarist and vocalist performing on the road and in the studio in Nashville. I also worked as a staff songwriter with several publishers and recorded for SONY and Appaloosa Records. After moving to the Virgin Islands I worked on the air for WYAC radio for several years.

Veronica: Computer geek. I had a web design firm in the 90s and sold it before the bubble burst. Then I worked at my kids' school in the Tech Department – so I could become even more of a helicopter mom. This ensured they couldn't make a move without me knowing about it!

What advice would you give to someone starting a new path in later life?

David: Mostly to be flexible, adjust to the unexpected. Veronica and I have a saying, “The Plan is No Plans.” We usually apply it to where we are going next but it can also apply to efforts to write about our travels and what's next for us. We try to let things take us where they will and adapt.

Veronica: Making the decision to jump is the hardest decision, after that things fall into place. Our aim is to encourage folks to make that jump. When your kids grow up, you find yourself missing more than just the kids. You lose a built-in community. No more school plays, sporting events, calls asking you to volunteer and connections to their best friends' parents. You end up with a lot of time on your hands that you are unaccustomed to.

Jump. Make that first decision. Start writing the Great American Novel, go back to college, volunteer to make the world a better place. You don't have to be as crazy as we are to be a GypsyNester. Trust me, once you jump, your reservations fade and become more manageable.

What is your proudest achievement in life?

David: Hmmm, that's hard to say... I'd probably have to say keeping a happy marriage and raising three kids for thirty years is a big achievement, but that certainly wasn't all, or even mostly, my doing. Veronica deserves most of the credit for that. Professionally, I'd say being able to survive, and even thrive in the music business is no small accomplishment.

Veronica: My kids. Not only do I love them because, well – they're my kids – I think they turned out to be really cool people. I'd be friends with any one of them. (Laughs) I made that sound like we had a brood, there's only three of them.

Where in the world is your favourite place?

David: I'm not sure that is even possible to answer. It changes on any given day. Sometimes I would say the mountains of Colorado, other times Rome or Florence in Italy. We just went to Prague last month and that might be my new favourite. Oh, and I still really love the islands.

Veronica: To date: Prague. Maybe it's because I'm Bohemian and my family comes from there. Prague spoke to me in a way I could never fully understand. We went there in our usual way – with no expectations – and every time I rounded a corner, I was literally blown away.

What’s the best holiday you’ve ever had?

David: Well, the last one usually. This time it just might really be true. We spent three weeks driving across Europe, from Barcelona to Prague and back, hitting ten countries in between. Five thousand kilometres in a little car that we named Benny and it was fantastic.

Veronica: When the kids were little (our youngest was still in diapers) we took a cross-country trip in a van and a tent. We hit the Southwestern US high points – The Grand Canyon, Mesa Verde, The Great Sand Dunes – a real 1950s style vacation. Three kids under six with no modern conveniences. It was completely nuts – and really, really fun.

What is your favourite book and why?

David: Wow, pretty hard to pick just one but 1984 was the first one that popped into my mind. It seems to me the perfect warning about human nature and politics. Fear and Loathing in Las Vegas would have to be up there too, along with Slaughter House Five.

Where do you see yourself in 10 years?

David: The plan is no plans so no telling but at some point I see us back down in the islands... on a boat.

Veronica: Youch. That goes contrary to the way my brain is wired. At the risk of sounding vague, on the road somewhere. Otherwise, I'll probably be a crotchety old lady holed up, surrounded by pictures and telling stories to anyone who will listen.

What is the secret to a happy life?

Veronica: Stop looking back at past mistakes. I periodically find myself wallowing in them, but with age I'm finding that I do it less and less. I am who I am.

What’s the best advice you’ve ever been given?

David: When I was on the road with Mel McDaniel back in the 80s we were going into a truck stop to eat and he said “Order what you want and eat what you get, boys.” That can apply to almost anything in life, just make the best of it. Pretty good hillbilly logic, I reckon.

Veronica: “Quit borrowing trouble.” That came from David. Things never turn out exactly like I imagine, and usually they're better than my gloom and doom scenarios. I'm learning to live in the moment and am much happier for it.

Who is your role model?

David: I don't think I really have one. I try to learn different things from different people depending on their area of expertise. I can say this, when it comes to parenting, my wife Veronica definitely is my model. Our kids wouldn't have stood a chance if it had been left all up to me.

Veronica: I don't believe in role models. It's too much pressure for the model and the modelee (haha! Is that a word?). We're all just humans – hopefully trying to be the best people we can be.

Who would be at your dream dinner party (dead or alive)?

David: Interesting. I guess I would want to keep it kind of small so we could really talk. Off the top of my head I'd say John Lennon, Bill Clinton, Hank Aaron, Kurt Vonnegut, my kids and of course, Veronica.

Veronica: I'd love to have all of history's religious icons at my dinner table. I want to find out if they would bridge their differences with love or war – and to see the look on God's face as he watches how they treat each other. It would also be interesting to see who doesn't show up.

If you won the lottery tonight – what would you do tomorrow?

David: Hmmm, another one of those questions where I'm supposed to say give it all away to fight hunger and promote world peace. But honestly, I don't think I'd do too much different than today. At some point I would get around to using it for seeing the rest of the world. I'd like to make it to each continent at least once before I kick the bucket. Then I could will the rest away to fight hunger and promote peace.

Veronica: Exactly what I'm doing now. Maybe in a nicer hotel – but probably not.

If you could be any super-hero who would it be and why?

David: This is a no brainer. Superman of course. He can do it all. I could get to all the continents in one day if I was Superman. Plus, bullets just bounce off of him.

Veronica: I'm kind of partial to Batman. He has no superpowers, he's just a really coordinated guy with cool gadgets. I like cool gadgets.

Get in touch! Are you living out your dreams in your later life? Have you started an unusual new business venture in your 50s or are you moving somewhere totally new in retirement? We're looking to feature people who are fifty and fabulous! So if that's you, get in touch [email protected]