A love of cinema and film-making meets religious and political resistance in Suhaib Gasmelbari's affectionate documentary about the work of four veteran Sudanese directors trying to bring back cinema screenings to Sudan. By Laurence Green. 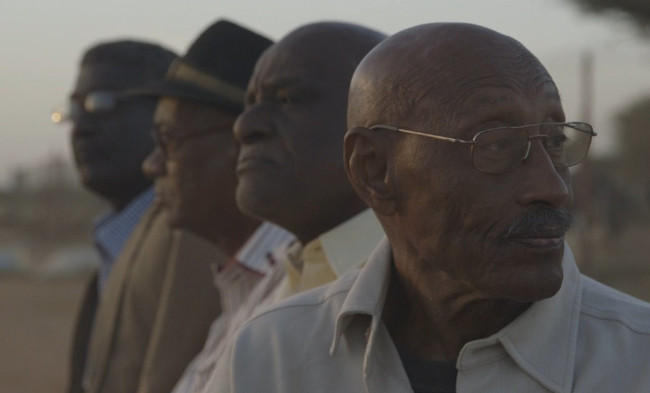 Don't be fooled by the title as Suhaib Gasmelbari's debut feature Talking About Trees (ICA) has nothing to do with environmental issues but is a poignant and witty documentary about four Sudanese filmmakers with a passionate love for cinema, whose careers were stalled by a military coup thirty years ago.

The northeast African country of Sudan is in a state of political and cultural instability, the result of unresolved trauma from decades of war and an increasingly hostile attitude towards culture that has resulted in the disappearance of countless cinemas. Filmmaker Suhaib Gasmelbari follows Ibrahim Shaddad, Manar Al Hilo, Suleiman Mohamed Ibrahim and Altayeb Mahdi, four veteran members of the Sudanese film club as they embark on a journey in which they aim to return cinemagoing culture back to the country. In the years that it has been absent, theatres have been turned into mosques and factories. But these men are determined to restore neglected classics from Sudan's cinematic past, despite facing religious and political resistance from all corners.

Their plan is to reopen a neglected outdoor movie theatre near Khartoum and give away tickets. But it looks as rickety as the 72 foot ladders they climb to scrub the crumbling walls of the cinema. The dedicated foursome repaint the peeling sign,print posters and canvass the local community to decide what film to show first--the people pick Django Unchained. They accept setbacks philosophically, with stoicism and amusement. Shaddad finds it hilarious when the general from the morality police, dealing with their request for a permit, gives them the runaround, disappearing off to pray for two hours.

Gasmelbari takes a meditative, gently observational approach here. He chooses to refrain from directly interviewing the four filmmakers; instead what unfolds is a rather lovely, poetic portrait of male friendship, cinephile obsession and elegant dignity. We are also given a few tantalising snippets of the films these directors made in their youth, making it clear the loss to cinema it has been not to have seen more work by these remarkable men. I enjoyed the amusing scene at the beginning, when, recalling the famous "closeup scene" from Sunset Boulevard, Ibrahim Shaddad wraps a blue chiffon scarf coquettishly around his face as Norma Desmond, simpering "I'm ready for my closeup".

This is a movie that provides a shared reminiscence of a golden age of cinema and highlights the palpable love and care with which these filmmakers approach their craft.

It is no surprise that the film won the 2019 Berlinale Best Documentary Award at the Berlin Film festival.