Shop for your next car online and you’re not only likely to secure a bigger discount, you’ll also have added protection if you change your mind. 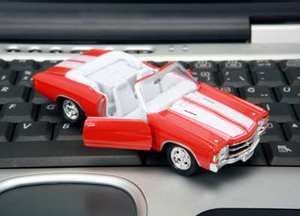 There are some compelling reasons to forget your fear and look for your next car on the net. First and foremost, it’s the best – and most convenient – way to ensure you’re getting the best possible discount on a new set of wheels.

Which? trawled the car market for 14 popular new cars in December 2009 and found 10 of them significantly cheaper online. Five were being offered at more than £5,000 below their list price, and six were more than £1,000 cheaper online than in a showroom. Many car traders say that online advertising has become the most important part of their marketing strategy, even if they are not set up to complete the transaction at a distance. This makes it the best place for buyers to compare the prices and specifications of potential cars. And, if an online broker offers you a 10% discount off list price, you can tell your local franchised dealer and ask them to match the price.

This quiet revolution started around 12 years ago. Richard Sanders, founder of Drive the Deal, claims to have sold the first new car on the internet in 1998. He reports a 35% increase in people buying online year-on-year.

‘I saw building an internet website as a way of quoting large numbers of people at minimal cost, so that I could pass on to the consumer as much of the saving as possible,’ he explains.

‘People like being able to get a quote without having to speak to salespeople – there is no pressure to buy. Contrast this with going to a showroom – if the buyer doesn’t know what discount to ask for, they may not get a good deal.’

New car brokers like Drive the Deal have been joined online in recent years by independent and franchised dealers and even reverse auction sites where traders bid for the chance to sell the consumer the car they want. Used car sellers have cottoned on to the advantages of the internet, too. Autoquake, which claims to be the UK’s largest online used car retailer, says its annual sales have increased from 720 cars in 2007 to around 8,000 in 2009.

It’s co-founder Fredrik Skantze says: ‘The two main reasons for people to buy used cars online are lower prices and convenience. Prices are more transparent so tend to be lower, and online sellers tend to provide thorough descriptions so buyers can make an informed choice from their home computer rather than going from showroom to showroom during the weekend.’

There are other benefits too, provided you’re prepared to be flexible about the exact make, model and specification you want. There’s an immediacy to online prices and deals. They react more quickly to market conditions than those in a showroom, so they change more quickly and canny buyers can snap up the best bargains. Possibly as important as price is the little-known fact that if you complete your deal online rather than in person, the sale is subject to the Distance Selling Regulations, giving you a sevenday cooling off period after delivery in which you can reject the car and be entitled to a complete refund. This is different from a showroom deal where you have no chance to change your mind.

These regulations add an extra layer of protection if you buy a car unseen and it turns out to be not as described. They also give you the chance to cancel the deal within seven working days if there’s a sudden change in your circumstances.

However, online won’t be the best buying route for everyone, and there are potential pitfalls to watch out for. If you have a part exchange car, you may have to sell it privately or offload it at a trade price to a local dealer because not all online sellers are set up to deal with part-exchanges. When buying online it’s also important to check the car you’re interested in is a UK model. If it’s an import – which are often sold at lower prices – the spec could be different and it’s likely to be worth less in the future.

Another discounting incentive that has returned over the past year is the selling of new cars that are registered as sold to a company (to qualify for generous fleet discounts). Unlike normal pre-registered cars that dealers put through their own books to meet their sales targets, these cars are registered to a fleet or hire company for three to six months. This means you won’t be the first registered owner of the car, and that, although you get the car straight away, you won’t get its V5 registration document until the fleet or hire company agreement has ended. Although this can deliver big discounts, it would put you in a dodgy situation if the broker or hire company goes out of business, as there won’t be anyone to transfer ownership of the car to you. So, while buying online may look quick and easy, the same caveats apply as with any car sales transaction. Check out the background of a seller thoroughly – how long they have been trading and how many cars they sell each month – and if possible obtain feedback from other buyers so you can ascertain whether or not they are a bona fide business. If you’re unsure, try calling to speak to them to find out more. And remember that if you are offered a deal that’s too good to be true, it probably is.

However, now that a large proportion of the new and used cars up for sale are advertised online, the internet is definitely the most effective modern car-buying tool at your disposal. It provides a quick, convenient way for you to do your pre-buying research and equip yourself with the information you need to get the best possible deal.