Isabel de Salis explores the menopause and explains why there is a need to end the silence that surrounds a stage of life that half of humanity go through. 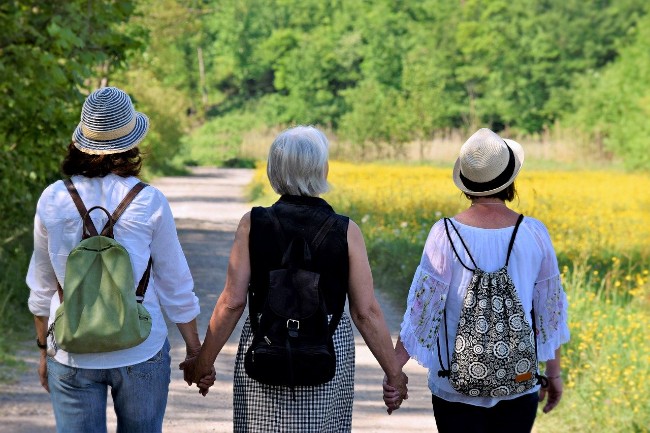 Women experience the menopause between the ages of around 45 and 55, but their experiences of this significant stage of life are diverse. Each woman’s menopause is unique.

Common themes run through women’s stories, however. From our research talking with women in midlife, we found that they often talk about menopause as a normal, inevitable and natural process, which of course, it is. Seeing menopause in this way allows women to minimise symptoms and behave stoically. “It’s no big deal,” one woman told us. “You just get on with it.”

But this positive approach can also be a rebuttal of a common perception in society of the menopause as a negative event – a view which leads to denigrating women who react differently to the menopause.

Because for some, menopause is considered a loss, a struggle. Bodily sensations such as mood swings or hot flushes can be overwhelming and embarrassing. The negative images many often associate with menopause can be distressing – a barren land signalling the end of fertility, youthfulness and sexuality. Women may mourn the passing of a phase of life when their biological usefulness is over – menopause is seen as “a marker of getting old”.

I feel like my life’s over. It marks the end of being young and attractive and fertile.

Some of those with no close female network and who worked in predominantly male environments, felt unable to share their experience. Women often felt foolish asking for help – that they would be wasting their GP’s time or admitting incompetence to a boss.

The stigma of menopause, with its associations of hysteria and incompetence, the shame of ageing, and the taboo about revealing menopausal symptoms, compounds the distress and struggle. Stigma can become internalised so that beliefs about other people’s reactions to menopausal symptoms such as hot flushes can be unduly negative.

Less commonly, menopause is treated as a positive marker of “moving on” to the next stage – a time of “new beginnings” and renewed libido. For these women, menopause is a “rite of passage” involving both social and psychic transformation whereby a sense of self emerges anew from loss, grief and shame. Another different experience occurs when bodily sensations like hot flushes are actually welcomed. Some described the physical side of menopause as feeling “nice and toasty”, and “helping me move on to another stage in life”.

So although menopause is frequently perceived negatively, as something to be ignored or dreaded, we heard positive perceptions. This is important. One woman commented:

It’s kind of a gateway isn’t it, in to the next stage of your life? It sets a point in the sand about how long you’ve been on the earth.

Women with more negative attitudes towards menopause report more symptoms during the transition, and we know from cross-cultural research that experiences of menopause are socio-culturally shaped and not universal.

The most common reported symptom among Japanese women, for example, is not hot flushes or night sweats, but chilliness. Menopause can be experienced particularly negatively where fertility status is highly valued as in rural Iran. But where post-reproductive status is seen as positively transforming, as among Taureg women in the Sahara desert, or Rajput women in India, it is welcomed.

Contrasting lifestyles, physiology, diet, genetics, reproductive history and physical environment all contribute to the variety of experiences worldwide. But we need also to acknowledge how important are the expectations and meanings of menopause, and the attitudes towards fertility loss and ageing.

Many women want and need more support going through menopause. They want reliable information. There is now more discussion about what can be done in the workplace to support women through menopause, especially if they have difficult symptoms.

A recent report from the University of Leicester acknowledged that gendered ageism is a significant concern for women at work. The official guidelines on menopause may enable the health sector to address women’s health matters seriously.

Can we reclaim the menopause as a powerful and positive process in women’s lives? It is difficult to experience menopause as transformative when it is primarily considered as degeneration and decline, and the multiple meanings of menopause are hidden. As part of our research at the University of Bristol, we are inviting women to share their experiences with us.

Menopause is a political issue that is rarely discussed. Imagine, for example, a society that accepts women having hot flushes in the boardroom or in which post-reproductive status is valued. Perhaps even a society which allows for women to welcome the menopause.

Fundamentally, we need to value all women’s diverse menopausal experiences without assuming they are hysterical, incompetent, or “past it”. We need to end the silence that surrounds a stage of life that half of humanity go through.

Image by silviarita from Pixabay