Understanding how to care for ageing hair could make the difference between your style being Gran or Glam! 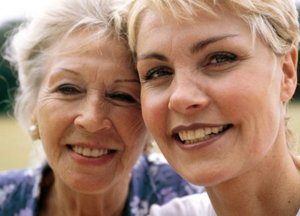 According to new research women believe their teens were a style low point when their hair looked its worst, but style mishaps aside, youthful locks are what women want with lack of volume and shine and grey hairs cited as their biggest ageing hair complaints.

Despite the fact that they didn’t master the perfect hair do until they reached the age of 36, the poll also found women felt the need to change the style of their hair at 46 to ‘suit’ her age. ‘Be confident in your look and make more of a statement with your cut so you don’t appear out of date and a little ‘mumsy’,’ councils Denise McAdam a celebrity hairdresser who’s client list is a roll-call of the world’s most glamorous women.

The research by nurture replenish found that third worry about having an ‘old lady style’ but grey hair split the pack with 57 % saying it was important to cover it up and 42% claiming we should just embrace it. Whether we like it or not 57% of women feel grey hair still carries a stigma, but Denise McAdam disagrees: ‘White hair looks brilliant in a short, edgy style, like Judy Dench’s cut. Or a fabulous sharp bob. But hair needs to be in tip-top condition to keep it looking shiny so make sure your shampoo and conditioner are hydrating.’

Women who do think grey should be hidden say 43 is the age to reach for the hair dye and a third of those surveyed say that grey hair is more ageing than lines and wrinkles. 37% pluck out their greys, but as a spokesperson for nurture replenish states: ‘Our skin isn’t the only aspect of our appearance affected by the ageing process, hair is a big age giveaway but whether you want to embrace grey or cover up, it’s the condition of hair that will make the difference between gran and glam.’

Pigtails, bleach, visible re-growth and hair extensions were the top four hair no no’s for women over 50 and 35% of those polled accept that their hair was in its best condition in their twenties, knowing that that was because they had youth on their side. As leading trichologist, Iain Sallis explains, our hair changes with the decades: ‘As we get older the growing phase of the hair becomes shorter, and so our hair does not grow as long, more hair falls into the shedding phase faster, This means that volume can be dramatically reduced.’  Iain goes on to explain how menopause affects women’s hair health: ‘During and after the menopause, oestrogen is reduced in the body, meaning testosterone has a bigger effect on their hair cycle, making hairs finer and thinner.’ The results of the nurture replenish survey back this up with 49% of women citing loss of volume as their biggest age hair concern. A third worry about fine hair and a quarter of those polled say they battle with lack of volume.

Age aside; it seems bad hair days plague most women who say they are happy with their hair only three days a week. On average women try seven styles in a lifetime and experiment with three different hair colours.

There is also a clear trend for DIY hair care, with 34% confessing to using lemon on the hair to lighten it, 20% have tried beer, over half of those polled experiment with home hair colour and nearly 60% have tried to cut their own fringe.

‘Nearly half of those women polled have realised hair needs extra TLC as we age and are investing more in hair care products,’ added a spokesperson for nurture replenish. ‘And it’s worth splashing the cash as 44% of the women we surveyed say they notice their friends hair first, before their skin or make-up.’