Aloe Vera has been used as an anti-inflamatory and skin soothing remedy for 1000s of years. Here's a quick guide on how you can make the most of aloe. 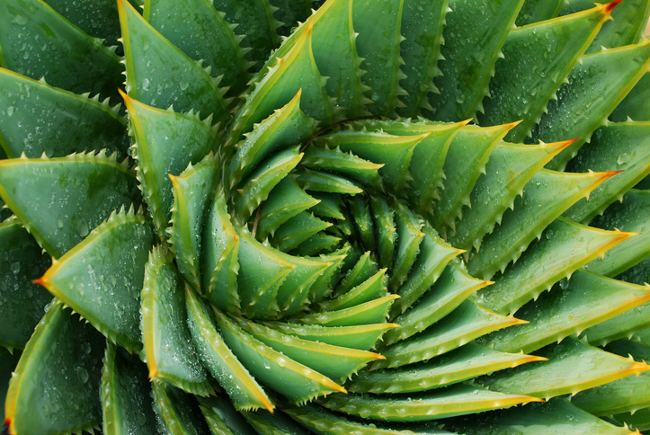 At a glance, the spiky leaves of this funny looking plant look foreboding rather than comforting, yet they conceal a gel which can be effectively used to treat all sorts of skin complaints including eczema, sunburn, minor burns, cuts, abrasions, rashes, insect bites and stings.

Originating from Africa, Aloe Vera has been used medicinally for thousands of years. The earliest record of it's use was found on Sumerian clay tablets from India, dating back to 2200BC. Aloe was also prized in the ancient civilizations of Greece, Rome, China and Egypt.  It was part of Cleopatra's beauty regime, referred to as 'the plant of immortality' and added to the grave goods of Pharaohs.

Although over 250 species of the plant can be found throughout Africa and Asia not all are suitable for healing purposes. The species you should buy is Aloe Barbadenisis Miller, which is available in local garden centres.

Two parts of the plant can be used medicinally - a clear tasteless gel which forms inside the spiky leaves, and a yellowy juice, extracted by juicing the whole leaf. The yellowy juice has a laxative effect but herbalists and nutritionists warn against it's consumption because it is too powerful a laxative which eliminates essential vitamins and minerals in the process. We do not advise the consumption of aloe vera until you have spoken to a professional.

The colourless gel can be squeezed out a of the leaf and applied directly onto the skin.  Cut a leaf off with a pair of scissors two centimeters from the base. Squeeze out the gel and apply liberally.  You can store the leaf in a plastic bag in the vegetable compartment of a fridge.  When you use it again just trim off the end (it may turn brown) to reveal the fresh gel.

Although it looks like a cactus aloe vera is in fact a succulent and member of the lily family.

Position - In their natural habitat aloe grows in full sun but it happily tolerates darker surroundings so don't be put off if you have a dimly lit room in mind but it is best placed on a warm sunny windowsill.

Soil - Like all succulents and cacti it prefers coarse, sandy, well-draining soil rather than dense clay soil.

Watering - The aloe plant is made up of 96% water which it stores in it's in roots and leaves.  The soil should be allowed to dry and the plant watered sparingly from the bottom.  Like most succulents, aloe becomes almost dormant in the winter months so water less than in the summer months.

Repotting - Aloe has a wide reaching shallow root system so when it's time to re-pot chose a wider pot as opposed to a deeper one.

Cuttings - The aloe produces baby aloes around the base of the adult plant.  These can be pulled off when they are a couple of inches long and replanted.