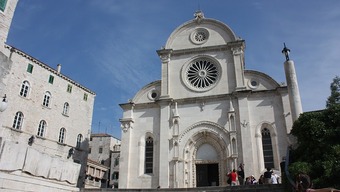 In here I explain why you should visit Sibenik and why it is an extremely friendly city for everyone.

If you are 50 and above and you are Viewing Sibenik from the outskirts one might wonder if it’s the right destination choice. However, this changes quickly once the city center magnificent medieval heart is reached where Sibenik gleams white against the placid waters of the bay.

The city offers a view into city fortress, medieval palaces and the unique cathedral of St. James where you can get a view into history, stories, and legends that are endless in Sibenik.


1. Cathedral of St. James
The turret of the cathedral can be viewed from every corner or photo that you make while in Sibenik. It is one of the cities fortresses which can be accessed from any direction towards the old town. It took a century to be built (1431 to 1536). As a result, Sibenik cathedral was made a world heritage site by UNESCO.


2. Count’s palace-a civic museum
A short walk from Sibenik cathedral is the rector's palace of the late renaissance popularly known as the count’s palace i.e. Keeve Palace in the local language. It was originally constructed as the governor’s residence during the Venetian rule. The name of the building emanates from count Niccolo Marcello, a Venetian who ordered its construction in the 1600s. Indeed, the building is an icon for the Sibenik civic museum known as Muzej Grada Sibenik. It has numerous archeological artifacts ranging from coin collections, sculptures etc from the Neolithic Roman era. It address location is Gradska Vrata.


3. Sibenik the old core
Visiting this city you will quickly view why the place was once a fortress on a hill which has been watching over the mouth of Kaka's tight and the sea channel. The city was born as a result of migrants mingling due to its location as the gateway to the east and the city was born.

The city’s oldest street is George Dalmatian street known as Ulica Luria Dalmatinca named after the cathedral builder who resided there. His stone house has a coat of arms among the many stone houses located here. With time, the city has grown with new defense walls, water supply e.g. square four wells, monasteries and churches being built. This has made Sibenik to be a unique and populous medieval Dalmatian city with 12,000 inhabitants worth visiting. All that was ever built during the time has been preserved by the city. It is lively a town with residents making it one of Croatia real estate gem.

Tvrdava St Ana as its locally known is the city’s oldest defensive structure that dates back to the medieval era. The original structure was destroyed by a lightning strike on its munitions storeroom that led to a devastating fire. This prompted for the fortress to be rebuilt in the 16th century. Today is largely in ruins; nevertheless, it’s worth visiting its aged ramparts for a spectacular view of the city, Adriatic Sea as well as for a nostalgic sunset.


5. Dolac-the heart of old Sibenik
Dolac is a charming and oldest location of Sibenik where everything is as it was. Stone cliff houses built centuries ago and double defense wall connecting the nearby vineyard makes it the soul of medieval of the city.