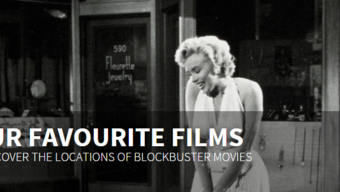 Seeing your favourite movie come to life is a great experience, and the ideal way to do this is to visit the set. Countless world-class films have been shot all across the globe, so combining your love of film with a love of travel can be a great way to see some interesting places. We’ve compiled a list of some of the most famous and impressive sets and locations to get you inspired for your movie-related travel.

There are even websites dedicated to helping you travel the world in terms of experiencing the greatest movie sets in real life. This one from musement.com has to be our favourite, and a lot of the locations it mentions may surprise you!

Essences of Kubrick’s work lives on all over London, with many of his films set in whole there, or at least have some ties to the city that was so important to him. You can pay a visit to places including Brunel University; featured in A Clockwork Orange, or check out the Beckton Gas Works where Full Metal Jacket was filmed...though disguised as Vietnam!

The American fantasy drama Game of Thrones has been filmed in a variety of incredible locations across the globe, including Croatia, Morocco, Iceland and Northern Ireland. Though the settings become a backdrop for blood, gore and death, the actual real life places couldn’t be more different. The forest style road known as the Dark Hedges in County Antrim, Northern Ireland is the perfect example of this tranquil, juxtaposition.

3. Lord of the Rings, New Zealand

J.R. Tolkein’s fictional place of ‘Middle Earth’ comes to life in the idyllic scenes of New Zealand’s village in the heart of the Waikato region, named Matamata. The location is open to the public who can experience life as a hobbit amongst the endless meadows and picturesque streams.

4. The Sound of Music, Salzburg

The hills are definitely alive (and are breathtaking!) with the sound of music in the film’s location of Salzburg, where the Von Trapp family live. You can take a look around the sets of many of the film’s iconic scenes, imagined and brought to life by writer Robert Wise.

Those who love action along with archaeology will no doubt fall in love with the setting of Lara Croft: Tomb Raider. As you visit the 54 towers still standing from the film and still complete with the enigmatic smiling faces, you can almost sense Angelina Jolie completing her mission!

Suzanne Collin’s novel was adapted for the screen in 2012 and has been taking the world by storm ever since. The terrifying ‘games’ take place in the otherwise idyllic setting of the Dupont State Forest in North Carolina, which is a beautiful backdrop of waterfalls and pine forests.

Hello! Thank you for this list. I am not gonna leave my house to watch it because I can watch at home. I have bought programmable rcu on this site and forgotten about watching movies out. Now I have everything in my house and that's exactly what I wanted.

Guys, I just found this site and honestly, their contents are definitely worth the seeing. Go and check out this site because it is completely free at the same time. This site really deserves all the attention for sure!

I could not refrain from commenting. Exceptionally well written! <a href="http://www.sellmyhouseintampa.com/">&lt;!--td {border: 1px solid #ccc;}br {mso-data-placement:same-cell;}</a>sell my house for cash tampa fl