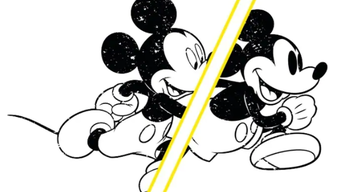 Posted on: 20 January 2019 by Marinette Hernandez

Mickey Mouse is the global icon! In 2018 we celebrated the 90th anniversary of this Disney hero.

Mickey's silhouette - a larger circle adorned by two smaller ones - is as recognizable as the character itself and is seen as an insignia for the character.

In 2018 we celebrated the 90th anniversary of the mouse who started it all!

Over the years, Mickey Mouse has become the face of Walt Disney. And I have prepared several interesting facts about the anniversary hero!

On November 18, 1928, Mickey Mouse made his theatrical debut in Steamboat Willie, the first-ever fully synchronized sound cartoon. This date is considered Mickey’s anniversary.

Walt Disney’s first major cartoon creation was not a lovable mouse, but rather a rabbit named Oswald.

Mickey has experienced several changes throughout the years. He was given white gloves in the animated short, When the Cat’s Away(1929) and spoke his first words, “Hot dogs!” in The Karnival Kid (1929).

Mickey is forever courting Minnie as his one-and-only. Minnie often helps Mickey by taking care of his dog, Pluto.

In November 1978, Mickey Mouse became the first cartoon character to be honored on the Hollywood Walk of Fame.

Ear Force One, a hot air balloon designed in the shape of Mickey, made its debut in 1986.

Today, Mickey Mouse is the official greeter of the Disney parks around the globe. He has greeted kings and presidents, prime ministers and princes, actors and millions of fans.

Walt Disney once said, “Mickey was the first cartoon character to stress personality. I thought of him from the first as a distinct individual—not just a cartoon type or a symbol going through a comedy routine.”

Our Bonds&Me discount will be applicable for these styles. For more info on the range, stay tuned to our blog closer to the release date!

I agree with you that Mickey Mouse is legend icon and people know them really well. I watch some videos at cheap assignment writing service uk and they talk about it and how we make cartoon with great ideas.