A Brief Look At Jewelry Through The Ages 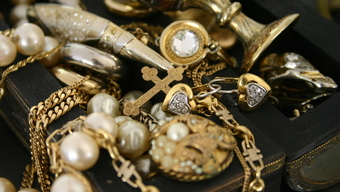 Lets take a flying trip through the ages as we take a look how history has influenced jewelry and why it has evolved in the way it did.

Jewelry has long been a part of human culture and even dates back to prehistoric times when jewels could be made using stones, animal skin, bones, shells and many more available materials.

However as technology began to advance and the knowledge of gems and taming metals increased, this helped to pave the way for the development of some of the most precious stones that we often still see today.

Furthermore this progression hugely influenced many cultures and styles of jewelry, and provided a sense of meaning to those who wore it.

Yet although the understanding and processing of jewels continued to develop and evolve through the years, one element that remains to have been maintained through history is the symbolism of jewelry and its meaning.

Whether this was for religious, wealth, status or other possible reasons, jewelry was and still is a form of individual expression.

So lets now take a flying trip through the ages as we take a look how history has influenced jewelry and why it has evolved in the way it did.

The Georgian era classed as the period between 1714 and 1830 including both the French and American Revolutions, displayed a variety of jewelry styles during this vast era.

Largely worn by the wealthy and the elite individuals of this time, jewelry belonging to this era was considered to be elaborate and regal.

Sets of matching pieces were another popular feature of Georgian jewelry which included necklaces, earrings, brooches, combs, bracelets, pins and tiaras, and would have been passed down the generations of a single family, worn by leading female member of the family according to Jewelry Information Place’s article looking at jewelry through the ages.

All jewelry in this era was handmade, and this period was also perceived to be a time of innovation. Bright and colourful large gems were also a favourite set in an elaborate Rococo style.

If you want to read a bit more detail into the style of Georgian gems then head to the Laura Boyle’s blog discussing the changing tastes in Georgian jewelry here.

This period saw the reign of Queen Victoria and which lasted from 1837 to 1901. Importantly the Victorian period witnessed legal and social reforms, having the effect of narrowing the gap between the middle class and aristocrats.

The discovery of gold and gemstone deposits throughout Africa and America meant that as these items became more accessible to the middle classes, these gems became less sought after and expensive.

Much of the jewelry from this period based itself on the style of the Queen. Victorian jewelry is also described as being very romantic which fits the ornate and decorative style of the items belonging to this period.

Pendants and lockets finished with decorative and intricate detailing were a popular style of this era, that is until Prince Albert died in 1861 when black jewelry took over and remained in style until the death of Queen Victorian 1901.

You can find out more about mid-Victorian jewelry pieces popular to this era by heading to the International Gem Society.

Kind Edward VII came to power in 1901 until 1910 and the style of jewelry transformed itself from the sombre black mourning pieces of the Victorian era to lacier, more delicate and decorative pieces during this period.

However there was still evidence of a Victorian influence during this period as much of the jewelry found in the Edwardian period took on a feminine design, often incorporating hearts, flowers and filigree features on the pieces.

Another popular feature of jewelry belonging to this time was the presence of platinum on yellow gold, often with a diamond trim, giving off a white-on-white appearance.

Witness for yourself the sheer elegance and marvellous detailing of Edwardian inspired jewelry at Royal Antique Jewelry.

The last period we’ll be taking a look at is the Art Deco period lasting from about 1920 until 1935 and is a particularly exciting and exhilarating time characterized fantastically in F. Scott Fitzgerald’s The Great Gatsby.

The jewelry of this period interestingly was inspired by the political, social and economic events of this time as jewelry took on new and bolder geometric shapes.

The roaring 20’s certainly displayed a period of wealth, prosperity and rebel which can be regarded as being reflected in the popularity of diamond engagement rings, multiple strands of pearls and large gems were used to form the angular shaped jewelery.

Looking back at how jewelry has evolved through history doesn’t just highlight that our taste in jewelry continues to grow, yet more importantly, the design in jewelry tells a story about what was happening within the period that these pieces were made popular. The symbolism of jewelry expresses and communicates unsaid emotion which is truly amazing.

Modern young people often use various nonsense instead of jewelry and call it modern fashion. I can see it in my children. Fortunately, this kitsch goes away with time. When my son found a match for himself he chose a really unique white gold and diamond engagement ring, look at this website. It was a flawless engagement gift and of course she said yes.