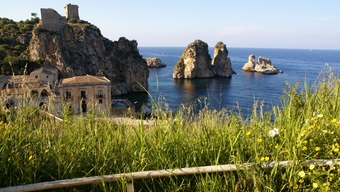 Located off the tip of Italy’s toe Sicily is a concentrated distillation of history, architecture and gastronomic delights, where mountain ranges jostle for supremacy, incandescent volcanoes light up the night skies and the sea has sculpted a coastline of stunning variety and beauty. Here’s a pick of some of the best activities for travellers when visiting this unique and often remarkable island.

Located off the tip of Italy’s toe Sicily is a concentrated distillation of history, architecture and gastronomic delights, where mountain ranges jostle for supremacy, incandescent volcanoes light up the night skies and the sea has sculpted a coastline of stunning variety and beauty.

Here’s a pick of some of the best activities for travellers when visiting this unique and often remarkable island.

If you’re keen to see the sights and soak up some history then Sicily contains a vast array of delights. In many ways it’s almost like travelling back in time thanks to its varied and intriguing past. Over time it has been part of the Greek, Roman and Byzantine empires as well as once being ruled directly by the kings of Spain.

A good place to start is in the Sicilian capital Palermo which is over 2700 years old and is bursting at the seams with historical delights. You’ll be able to see some of the Sicilian capital’s most famed monuments such as Palermo cathedral, characterised by the presence of varied architectural styles due to the many alterations and restorations it has undergone. Palazzo dei Normani is another treat, one of the most beautiful Italian palaces and a notable example of Norman architecture. It houses the famous Cappella Palatina (Palatine Chapel) constructed in 1080 and beautifully decorated with mosaics and fine art.

It’s fair to say that no trip to Sicily is complete without a trip to Mount Etna on the east coast of Sicily, arguably Europe’s greatest natural wonder, a sacred mountain of legend and myth. Volcanic activity first took place at Etna about half a million years ago and thanks to the fertile volcanic soil which supports extensive agriculture there are many beautiful vineyards and orchards spread across the lower slopes of the mountain.

Take a walk on the wild side

Despite the often intense heat during the summer months, Sicily remains a walker’s paradise with a multitude of hiking and walking routes to enjoy, whether you prefer trekking on the charred slopes of volcanoes or sampling the lush greenery of National Parks.

One of the most wonderful walks can be found on Vulcano, one of the most visited of the offshore Aeolian islands. Its star attraction is the Gran Cratere, which hasn’t erupted since 1890. To reach the peak allow about three hours to get there and back on a well-trodden route that offers some spectacular views of not only the volcano itself but of the other Aeolian islands as well.  An alternative is a walk round the small island of Ustica which can be reached by boat via Palermo. Achievable in four hours, taking a walk round the coastal paths offers some of the most stunning sea views you’re ever likely to see. If you’re feeling particularly adventurous you can cool off from your walk by taking a dip in the beautiful blue water!

Soak up the sun

After all that walking it’s likely that you’ll want to sit down and enjoy a rather less strenuous activity - relaxing on one of Sicily’s beautiful beaches. The island is home to some of Italy’s best, with long sandy beaches and enticing bright blue waters.

Porto Palo di Menfi beach in the south-west of the island is well worth a visit. Renowned for its quiet and relaxing nature, it regularly receives the highest award possible in Italy for its quality, services and cleanliness. The marina is near by giving you the opportunity to watch the many boats and small yachts coming and going. Or if you’d prefer simply to laze around and enjoy the sunshine with a drink and some excellent Sicilian food then there is a plethora of bars and restaurants to sample.

Sampieri beach, located to the south of Scicli, is a real gem boasting one of the most beautiful shores of all Sicily complete with long sand beach and spectacular rocky cliffs. The beachfront is extremely well kept and is dotted with palm trees, a reminder that the African coast is not that far away. If you stay until the evening then you’ll be able to enjoy remarkable sunsets and a cool sea breeze.

Reserve some time for nature

West of Palermo, the coastline becomes rugged, rocky and, in places, spectacular. Part of the coastline in question is home to Lo Zingaro Nature Reserve. Stretching along the coast for 7km this park and its surrounding areas are one of the most beautiful parts of western Sicily. There is a vast array of flora especially suited to the terrain thanks to the humid microclimate which makes it possible for over 650 different species to thrive here. Dwarf palms and other shrubs line most of the paths, while in the spring the grass of the slopes is dotted with thousands of colourful wild flowers – a glorious sight!

If you are looking for a slightly alternative Sicily then the Madonie mountains offers a great deal for contemplation thanks to its landscapes, its people and their way of life that has relatively little in common with that of coastal-city dwelling Sicilians. This mountainous park covering some 35,000 hectares offers the opportunity to view agricultural activities including sheep and cattle farming as well as the cultivation of wheat, olives and fruit. One tradition of particular interest is the production of ‘manna’, whitish resin that drips from ash trees when the bark is cut. It is often left to flow and creates stalactitic forms before being collected.

Villas in Sicily specialist Think Sicily can arrange for anyone staying at one of their villas to have the services of professional guides who can provide fascinating insights into the various regions, as well as years of experience on the best walking routes and safety advice.

I would like to suggest this company , I was in Sicily last summer and stay in a nice villa in FAVIGNANA  villa respiro , if never have a chance to go...try www.italianrentals4u.co.uk