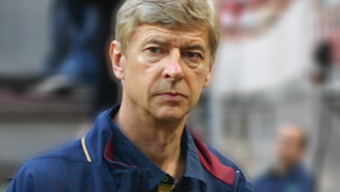 Arsenal make their worst start to a season in more than 20 years and suddenly all the talk is that Arsene Wenger is past it.

Just when did age become an inhibitor of talent? That's the question I was left asking myself this weekend as the fickle finger of fate pointed Arsenal out as this season's crisis club. After a period of quiet contemplation, I reasoned that the answer is an 8-2 defeat.

Last year, we had Liverpool and the hapless nincompoop Roy Hodgson (a talent-free zone all of his own making) filling the column inches of the tabloids as they crashed from one humiliating defeat to another. This term, however, has pitched up a genuine surprise - Arsene Wenger: a manager who has consistently developed attractive football teams on a fraction of the budget of many of his Premier League rivals.

Wenger's record over his 15-year stewardship is second to none. Patrick Viera, Fredrik Ljundberg, Robert Pires, Marc Overmars, Emanuel Petit and, of course, Thierry Henry are just a few of the players he has bought and turned a profit on. Though his real talent has been his skill at identifying and nurturing young players and bringing them through to the first team, among these Cesc Fabregas, Ashley Cole, Keiran Gibbs, Gael Clichy, Denilson and Jack Wilshere have all distinguished themselves.

Arsenal have reaped huge success from the efforts of Wenger and it really grates to hear so many of the club's (albeit younger) fans now so openly criticising him because he no longer has the desire. Cast back six months to the closing weeks of last season and Arsenal were in contention for the all of the major trophies - they played the best football of any team in the Premier League and were on the brink of another great era.

Unfortunately, there's no place for the 'jam tomorrow' mentality in modern football. Never mind that a Wenger team completed the entire 2003/04 league season unbeaten or that he has secured lucrative Champions League football for the past decade. No, it is clear to all armchair pundits that he has lost the plot. Apparently, he has money to spend and has been too stubborn to invest in new players. So there.

With a track record as strong as Wenger's, I would trust his judgement over the quality of players he wants at his disposal. Surely, a model that identifies low-cost assets and sells on at significant profit is sound business sense, rather than the knee jerk signings of journeymen he is being pressurised into making on transfer deadline day.

Wenger, though, is the latest in a line of older managers to be bashed with the 'age' stick when things don't go to plan. Port Vale legend, John Rudge was one, Dario Gradi another. Sir Bobby Robson was a frequent target in his later years at Newcastle and Alex Ferguson at Manchester United also found himself on the receiving end of ageist barbs when the 'Special One' was sweeping all before him with Chelsea.

How is it possible to use the longevity of a person's time in a specific role as a measure of their suitability to continue? Ferguson, after all, was harried for three years, during Chelsea's period if dominance. Though funnily enough, the jeers turned to cheers once he had again rebuilt a team that won the title three years on the spin and a Champions League trophy to boot. Ironically, as he approaches his 70th birthday it was Ferguson's United that demolished Arsenal and gave voice to this chorus of criticism that is deafening Wenger.

If ever there were a statement to invalidate this idiotic argument, surely it was made at Old Trafford on Sunday.

Sadly, managers are either paid a great deal to make footballers do what they're already good at, or to take the blame when the other 11 useless men fail to deliver. A bit of a raw deal for a very successful career, but football needs scapegoats.

You needn't be old to be viewed as sub standard in what you do. Wenger has been treading water for the past six or seven years and while I agree that he puts out some very entertaining teams - the name of the game i winning. If he isn't doing that then questions have to be asked - especially from those Arsenal fans who paid for train fares and tickets to the home of European football titans - Blackburn, to see a performance of calamitous proportions from the team Arsene Wenger selected. It is not his age that is in question, simply his judgement.

Arsenal team is playing very poor football recently because team management is not good.too much changes not working.

Thank you very much, it was a useful read. I used to watch a lot of football on TV and later was even betting on it. But now as there is so much stress around, I prefer to simply play slots in the traditional online casino https://casinoofthekings.com/davinci-diamonds/ so that nothing loads my mind deeper again. And I even managed to win so I haven't lost my luck and skill yet.