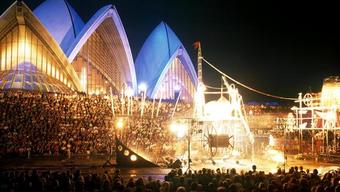 Whilst Australia is famous for the iconic Sydney Opera House, it also houses many more fine opera venues across the country. Here I reveal some of Australia's most spectacular venues and the unmissable concerts that are coming up.

At 162 metres tall, with its striking spire, river side location and an abundance of esteemed opera productions regularly showing, The Arts Centre in Melbourne should be on any opera enthusiasts list. The Arts Centre is actually a complex of theatres and concert halls scattered by the Yarra River, along St. Kilda Road and into the Melbourne Art Precinct. If your arts interest also extends to ballet, theatre and music, you'll be pleased to know that the centre also regularly hosts performances from esteemed arts productions, including The Australian Ballet, the Melbourne Theatre Company and the Melbourne Symphony Orchestra.

What's on at the Arts Centre?

In July the Victorian Opera invites visitors to enjoy the witty comic opera production of Albert Herring by Benjamin Britten. As the story unfolds we see the meek and stumbling Albert journey from a fearful and submissive so, to one who steps out into the world transformed.

In November, Opera Australia will perform La Traviata, a romantic masterpiece about the beautiful courtesan Violetta, who finally succumbs to love with Alfredo.

Opera in the Vineyards, offers music lovers something very unique and unforgettable. On Saturday 15th October the Wyndham Estate Winery (famous for its sparkling Shiraz wine), will open its gates to welcome hundreds of music lovers to its annual feast of opera, food and, of course, wine! Picture yourself in these breathtaking surroundings, sipping a signature Australian Shiraz, with a stunning sunset in the background and the soaring voices of some of opera's greatest singers. This year sees the Opera in the Vineyards 16th Anniversary and the concert is set to be more enchanting than ever. Legendary opera diva, Dame Kiri Te Kanawa, is the star of the show and will be singing all her favourites by Puccini, Strauss and Handel, as well as a few additions from Broadway. There will also be special guest appearances from Phillip Rhodes (Baritone) and Brian Castles-Onion (Conductor). Gates open at 3pm, welcoming guests to a scrumptious food and wine fair before the concert commences at 7pm.

The historic His Majesty’s Theatre, or the Maj as it is affectionately known, is the only remaining working Edwardian theatre in Australia. The monumental Baroque building sits on the corner of Hay Street and King Street, in Perth's central business district. Built back in 1902, when it first opened it was the largest theatre in Australia, with seating for over 2,500 people. Today it is not only home to the West Australian Opera (WA Opera) but also the West Australian Ballet (WA Ballet). The WA Opera presents three operas in His Majesty’s Theatre each year, two of which are coming up soon.

What's on at His Majesty's Theatre?

In July WA Opera performs The Tales Of Hoffmann, an opera revolving around the character Hoffmann, an ardent lover, poet and writer who tells three stories of his great but unhappy loves - all ending tragically thanks to the meddling of his enemy.

In November, WA Opera will recreate Falstaff, a great comedy opera based on Shakespeare's play, and the last creation in Giuseppe Verdi's lifetime. After a series of hilarious and complicated interactions between the characters, the tangled webs of romantic intrigue, disguise and mistaken identities joyfully unravel.

Last but by no means least, it has to be the Sydney Opera House. As obvious as it may seem, it is one of Australia's finest opera venues. Attracting more than 7.4 million visitors a year and contributing more than AUD $1 billion to the Australian economy through tourism, hospitality, travel and other activity; the Sydney Opera House is not only a masterpiece of late modern architecture, but also a pillar of Australia's economy. Even more impressive, as the creative and cultural flagship of Australia, the Sydney Opera House has committed itself to continuing the legacy of its creator's creative genius (Jørn Utzon ) by producing and presenting the most acclaimed, imaginative and engaging performing arts experiences from Australia and around the world. What more persuasion do you need? Well there are all the magnificent opera concerts coming up...

What's on at Sydney Opera House?

In July, Opera Australia will perform Of Mice and Men, an opera based on John Steinbeck’s 1937 novella, with words and music by Carlisle Floyd, one of America’s most revered composers.

In September, Opera Australia will also recreate one of Shakespeare's most famous plays about the tragic regicide of Macbeth. Canadian René Richard Cyr, makes his directorial debut with Opera Australia in this striking production and Guiseppe Verdi provides the exhilarating and terrifying music.

With this selection of fine opera venues and many more all over Australia, you should need little convincing that Australia is an amazing place to see the opera. Getting to Australia is the only hurdle you may foresee, fortunately there couldn't be a better time to book flights to Australia. Austravel has flights to Sydney from as little as £675pp, flights to Melbourne from £629pp and flights to Perth from £619pp, making a special opera indulgence a little more affordable. Visit www.austravel.com for more information and holiday packages.

I witnessed this event of Opera event in the heart of Melbourne city when I was on a trip. The participants were enjoying it in the way it should be. Attending this event and reading https://ventsmagazine.com/2019/05/10/5-rules-to-follow-while-attending-film-festivals/<!--td {border: 1px solid #ccc;}br {mso-data-placement:same-cell;}--> blog is the biggest source of learning and inspiration at the same time for me.<!--td {border: 1px solid #ccc;}br {mso-data-placement:same-cell;}-->

I like classical music. This is great as a background for my YouTube videos. I can only regret that I so often meet the requirements of copyright holders to ban compositions ((

It’s hard for me to advise you because I’m far from the YouTube world. However, I am well versed in music and I know that there are special sites where you can choose a free option for personal use. There is also dramatic music. This is the most suitable option for background music in a serious video in my opinion.