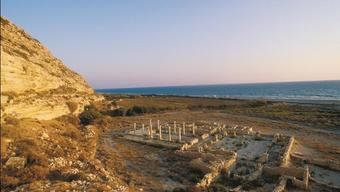 Cyprus for the history enthusiast...

Despite a politically complicated twentieth century, the island has managed to preserve its rich and ancient history with a plethora of Neolithic, Bronze Age and Roman sites to visit.

UNESCO has put Cyprus on the map of World Heritage Sites with the Neolithic village of Choirokoitia. The site dates back to roughly 6,800 BC and is one of the best preserved prehistoric sites in the Eastern Med.The earliest confirmed site of human activity was at Aetokremnos, which is situated on the south coast. Signs of human activity were found here from as early as 10,000 BC.

Paphos is a good spot to start your history-hungry tour and is famously know as the birth place of the goddess Aphrodite, who according to Phoenician mythology was born on the shores of Paphos. Dripping with archaeological sites, it’s hard to decide where to start. The incredibly well-preserved floor mosaics at the House of Dionysus are a favourite - forming part of a restored Roman villa dating back to 2nd century AD. Other sites include Paphos Medieval Castle, the Ancient Theatre (4th century BC) and the Ancient City of Marion.

Following a day of ruin exploration in the heat and dust, the Hotel Almyra in Paphos is an indulgent relaxing escape. Set within eight acres of gardens with breath-taking views of Paphos harbor and equipped with spa, tennis courts and pool, it provides a much-needed retreat.The Almyra Spa focuses on organic products and natural marine based skincare therapies from the Osea range, creating a holistic approach to treatments.

Set aside another day of exploration in Limassol, rich in both Neolithic and Roman heritage. Sites to visit include the Sanctuary of Apollo Hyates (God of the Woodland) and protector of the city of Kourion.

But for the ultimate archaeological hedonistic experience, head to the ancient city of Amathus. Situated 11km south of Limassol, Amathus’ numerous tombs can be found in front of the Amathus Beach Hotel, a luxurious resort to reside in during your stay and ideally located for all the sites.

Amathus is one of the ancient city Kingdoms of Cyprus where according to legend, Theseus left the pregnant Ariadne to be taken care of after his battle with the Minotaur.

The Amathus Beach Hotel is a member of ‘The Leading Hotels of the World’ and provides stylish and elegant accommodation set in magnificent gardens with panoramic views. With access to a secluded sandy beach and private pools, it’s the perfect place to cool down your weary legs after a day of sightseeing.

Sovereign Luxury Holidays has introduced a new series of unique travel guides with the ‘Insider’s Guide to Cyprus’ being its first. To download and print a free pocket guide to Cyprus, visit the Cyprus holidays page from sovereign.com.

Set aside another day of exploration in Limassol, rich in both Neolithic and Roman heritage. Sites to visit include the Sanctuary of Apollo Hyates (God of the Woodland) and protector of the city of Kourion.

Thanks for sharing this wonderful info. I hope COvid will end and i would get the chance to travel the world and visit Cyprus too.