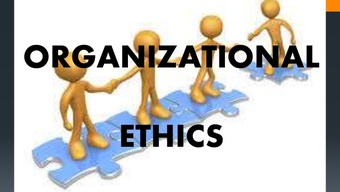 Different people have different meanings and definitions of organizational culture. It happens due to the fact that different organizations have its own cultural norms and practices.

Organizational culture can influence the creation of ethical and potentially unethical policies. For example if in an organization happen to have cultural beliefs concerning racial superiority, then evidently there would be policies and laws that support this kind of belief. There may be the situation that another race cannot be allowed to work in that organization or even to go in (Muijen, 2000).

For a society to function properly, it needs moral ethics. In another instance, if an organization has a cultural belief concerning alcohol, then it is most likely that that organization would create a policy on alcohol. For instance it might be that before selling any alcohol to anybody, checking of drivers’ license or any other identification will be introduced no matter the age or the appearance of the buyer.

A given organization has a policy that all its employees must only be males. The organization that has created this policy is based in a community where women are perceived as the house keepers. Their major role is to take care of the house and the children whereas the man of the house works and earns money. This organization based on this community also believes that women are created not to work hence there is a policy which does not allow to employ the female gender (Schabracq, 2009).

The culture of this organization influenced the creation of this policy because the company needed to maintain the image of the community. However, as the new administrator appeared, it would his responsibility to ensure that this policy is done away with. The reason why this policy would no longer work is because in the recent times, the female gender has been educated on their rights and quiet a large number of women has been venturing in to the job market. It should be noted that a lot of them have qualified for the positions in the organization and their input happens to be required for the success of the organization. With this in mind, the females who have qualified for the positions required then they should be given a chance to showcase just what they can bring to the organization. If their work is good then the policy must change. Nevertheless, it should be noted that for a society to function properly, it needs moral ethics, therefore changes of policies within the organizations should be relevant.

These methods are really effective for life and let me finish taking my assignment help classes then I will be here to ask some related questions from you.Thanks.

Great info thanks for sharing it.

You must have an Ethics to your organizations!  https://googlemapstraffic.com

Great information. I will check out the rest of your blog.  check this http://www.owassofencingservices.com/

The points which have been discussed in the article are very essential for any organization. I will follow all these techniques for my SEO related organization.

Maybe many of us follows the old beliefs I also believe it too, nothings lost if we believe it

I think the post that I read over there, It's really helpful and amazing to read about ethics in organizations and organizational culture.  App development company Toronto

Wow, this is helpful for management studying and professional studying ppl.

I am lucky to read this post friends. It looks like a bundle of knowledge. I am totally impressed with this.

Work ethics really determines how professional you can be www.graberfence.com/

Great info to read about ethics, hope you have others blogs about social-ethics. https://www.concretecontractorslittlerock.com

An organization devoting resources to developing policies and procedures that encourage ethical actions builds a positive corporate culture. This breeds organizational loyalty and productivity, because employees feel good about showing up for work.

It's really good to have known ethics in organizations. Definitely helpful.

Notice there is no reference to the consequences. prom limos

Your website seems to be down. I want to get in touch with you. Please message me.

I am a student and have this subject in my syllabus and I know why organizational behavior is important. An organization consist of a lot of individuals, having different backgrounds, culture and beliefs. So, for smoothly running an organization, it is necessary for the management to build an atmosphere where all of those individuals can mutually work with each other. So, every organization should start working in that way for attaining the goals. I liked this post but your site was a bit slow. You can increasing that switching your hosting to Bluehost as Bluehost Black Friday Sale is also coming. This can help you a lot.

I definitely agree on this one! Thank you so much for sharing this, I will discuss this with my colleagues at carpet cleaning hampton roads.

My colleagues at house cleaning syracuse ny loved this site and this article to be specific!

Hey! I am professional writer and I work at cheap-papers writing platform, and I should say that the ethic within the company should be present and should be well stickted, I am so happy to work with the good people, with whom I can be a good friend. Also I rite the work on ethics within copmany, which you can read at https://cheap-papers.com/write-my-discussion-board-post.php and compare your article with mine! Thanks you a lot! Personally for me it was quite interesting to read the view concerning the topic which I also wrote.

Your local septic system design and septic system service professionals. Trust us to do the job right everytime. All work is guaranteed! https://www.soilworx.ca

Organizations are perfect for people who wants to develop their skill and work easily.

Organisational cultures reminds the locals to stick to their tradition and pass it to the next generation.
https://www.housecleanersk.ca/

Companies that engage in organizational development commit to continually improving their business and offerings.

This article is very popular to the organization. We discussed things of its points of ethics. Thanks for this and we had a wonderful discussion. concrete contractors tuscaloosa al