Euro Turmoil: What To Do If You Are Close To Retirement 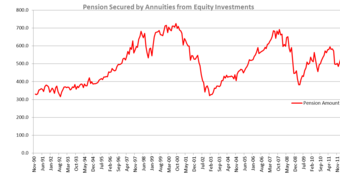 It is a bad time if you are approaching retirement because there are a lot of storm clouds brewing and the water is already fairly choppy. My Dad asked me should he cash in his pensions “Before This Bloody Euro Goes Bust”?

I advised my Dad to sit tight because he doesn’t really need to access the money for the forseeable future. I had already taken all the risks out of his investments five years ago when he first retired, so he can rest easy.

Here are the things I suggest you think about if you are deciding whether to cash your pension in now or wait until things are "back to normal".

Now I have no more idea than the next person about what exactly the market is going to do next. I do however have some idea of how choppy it can be.

Since the credit crisis began to unfold in late 2007, we have seen markets moved up & down by much greater amounts than they have usually done or were forecast to do.

Events that could be described as once in a hundred years were happening several times in a month.

Timing, and in truth luck, is everything in such situations.

Have a look at the chart which shows how much the pension you could buy after investing in stocks & shares has varied over the last 20 years. The first question is, can you afford to take these sorts of risks? Most people in truth can't.

The Euro crisis is likely to see stock markets lower, European government loans drop in value and anything materially connected to the loans of European banks too. Fears that this contagion could make most of the world a less valuable place could send all investments down.  Fear is a major driver and so markets could bounce back if fear levels drop.

We have seen gold – typically the safe haven investment – drop 5% in price during April - May 2012. The UK stock market dropped by 7% with UK Government loans going up by 5% in the same period.

In an extreme position, such as occurred between September 2007 and March 2009, the income you could secure could more than halve.  Even over short periods such as 1 month, drops as large as 25% can occur.

So the first thing to check is how exposed are you to the storm? If you have lots in shares and little in Government loans then you are very badly exposed.

The next thing is to measure how much you could lose out on over the next few months. You then need to decide whether you are willing and able to risk that loss for a gain.

I think losses are much more likely than gains over the next six months.

If you aren’t going to touch your money for over five years then this bout of choppy water may not end up costing you anything in the long term but you might be seasick on the ride.

If you are going to take money out then you need a measured approach. Going all in on low risk investments will give you security but will it provide enough for your retirement? A measured amount of exposure to investments that are likely to give a better return over the long term should be considered.

If you are taking retirement in the immediate future and have been caught by recent reductions, what can you do?

Consider all your options. For example you might just cash in part of your policy now to see you through the immediate storm and leave the rest of the fund sensibly invested.

In summary; don’t panic; don’t ignore the situation and take a measured view of all the options open to you.  Make sure you understand the options and only do something you feel comfortable with.  Doing nothing is a decision in itself so don’t be paralysed by the complexity. You are not necessarily in a safe place. A good financial adviser will be a valuable ally if you are unsure how to do this.

Let me know if you have any questions and I'll do my best to help.

My father raised me so I started thinking about my future as soon as I planned to go to college. I saw many different examples of investing while I was getting an education. I liked the example of our head of IT profession.  He had several businesses of his own and managed it.  It seems to me that this is the only sure way to financial stability. Yes, there is a risk of not staying at the top, but I want to be able to make decisions to maintain balance. My plans are to start an online store. This is relevant now.

Great look to the future! I also looked and tried to calculate how much more profitable to have my own business. And it exceeded all my expectations. I could never earn as much as a self-employed person. My specialization is IT. I have done several online projects and it brings me a steady income now. This did not work out right away. At first I tried to do everything on my own. However, then I realized that I should use the Digital Marketing Company Melbourne. This agency gave me what I needed. My sites are raised in the top Google search and have become relevant and in demand in my region. I am not afraid of approaching old age because I do not keep all the eggs in one basket.