Glasgow vs Edinburgh: Which is the best Scottish City? 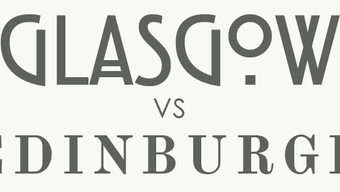 When traveling to the central belt of Scotland, it can be hard to work out whether to head to Glasgow or Edinburgh. Bearing this in mind, we thought we would put together a living infographic to help you decide.

When it comes to rivalry, the cities of Glasgow and Edinburgh have long been vying for superiority, each self-confidently staking a claim to the title of Scotland's Best City. While it goes without saying that both cities offer a wonderful range of cultural events, excellent restaurants and stunning architecture, Scots remain divided as to which of the two is the more worthy champion.

With each city boasting a unqiue appeal and charm, it can be incredibly difficult for holidaymakers to choose between these vibrant urban centres. Do you go for the galmorous night life on Glasgow's famous Sauichiehall Street? Or do you go for the medival castle perched on a volcanic rock in Edinburgh?

In order to decide once and for all which city is the best in Scotland, the people at Reserve Apartments decided to create this living infographic. The infographic allows you to vote on your favourite things about each city, updating in real-time so you can use the collective human brain to decide where to stay, Glasgow or Edinburgh.

The Results so Far

At the time of writing, we can see some very interesting results from the infographic. Let's break down the data topic by topic.

Some people joke and say the the words "Scottish Food" are tantamount to an oxymoron- clearly they have never had a chicken balmoral with a measure of Macallan Whiskey to wash it down.

In the food and drink section, Edinburgh wins the most votes by a whisker, with Innis & Gunn Beer, Macsween's Haggis and The Witchery beating out Tennents Lager, McCowans Toffee and Devonshire Gardens.

Perhaps the most famous landmark in Scotland that underlines the people's humour is the statue of the Duke of Wellington with a traffic cone on this head. People speculate as to how the traffic cone was placed atop the 12-foot statue. Was it picked up by a gust of wind? Placed there by a troublesome council employee? Or simply added by one of the students at the nearby Strathclyde University after an indulgent night out?

Despite the famous statue representing Glasgow, Edinburgh again gets the most votes with Greyfriars Bobby and Edinburgh Castle beating the Duke of Wellington statue and Kelvin Grove Museum. However, Glasgow does claw back a victory with George Square being voted more popular than Ediburgh's St Andrew Square.

Famous for discovering such artists as Oasis and fostering talent such as Biffy Clyro and Franz Ferdinand, it's no surprise that Glasgow steals the show with its superior music scene. The votes show that a whopping 80% of voters preffer LuLu over the Bay City Rollers and that 60% prefer Belle & Sebastian and Simple Minds to the Proclaimers and Idlewild.

With both cities producing their fair share of talented poets, comedians and actors, it's no surprise that this category produces a tie. Surprisingly, Sean Connery (James Bond) is beat out by Robbie Coltrane (Hagrid) and Ronnie Corbett wins against Frankie Boyle.

Whatever your tastes, we promise that a trip to Glasgow or Edinburgh will be an unforgettable one. With the warmth of the Scottish people and a vast array of things to do, see, eat and drink you will be spoiled for choice in these truley magnificent places.

To be honest, I'm surprised you forgot my alma mater .... The University of Glasgow is one of the oldest and most respected in the UK. I would put this at the top of the list.

It's great that you reminded me of this)) My son is studying at this university now. He grew up to be a very determined guy and I'm proud of him. The teaching load is quite high now and the professors seem to be very demanding. He even used the help of writers from this service - https://writemyessayquick.net/  This is a good way to improve the quality of your essays by having a good example in front of your eyes.  He already has more time in his second year of study and can go out with friends more often now)

Hi, thank you so much for the post. It is really amazing to read.

Well, I never visited any Scottish city, but I would like to come there one day. I am a student, and I don't get so much time to visit so many places. Today I searched for some help for my college essay work, and my friend suggested I read the reviews of the most honest and reliable edubirdie service, so now I can hire the writer who will complete all my tasks, and I can travel a little bit.