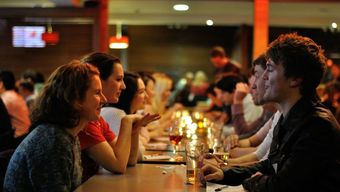 Men too have shown a marked preference

It is still considered against the norm for younger men to date older women. However the view is changing and more and more young men have tried to travel the un-trodden path more often. There have been many celebrities who have taken this path such as Demi Moore and Mariah Carey. One reason why such relationships seem to work is that this age gap leaves more room to explore the gender equality equation and thereby make such couples happier. Such things are very normal at the speed dating events.

The physical satisfaction which an older woman feels with a younger man is quite unmatched. Women naturally feel attracted to the vitality young women win. At the same time men too find the older counterparts to bring maturity to their lives. Moreover the question of physical attraction is the one which draws the younger men to the older women.

This new relationship is a reinforcement of the beauty of the older women. It is not that women are the initiators of such age-gap romances. Men too have shown a marked preference for older women in today’s times. We shall consider some reasons why younger men prefer to date older women.

Older women have their own life: According to some men, the main issue of dating younger women is that they feel that these women get too possessive about the men in their lives. This can create problems for both man and woman. In this regard, the older women have their own life to live with. Men feel comfortable with older women also because there is no pressure on him to impress her in any way. Older women can also appreciate the costs and hence are more likely to share the hotel bills.

She can hold her own in life: You might not be the first man in her life. She has gone through this before. Thus when a young man takes her out she will not feel bad if she feels isolated a bit. She would not crave for your constant attention. She may have experienced such situations before and this might hold good now as she would be able to display more maturity in such situations.

She knows her wants and desires: She has gone through enough in life and knows what to expect from younger guys. You also would not hesitate to go ahead and shock her. She may be game for it or she may have the guts to refuse it outright. She may not feel shy of saying so too. She has the maturity of handling ugly situations and may teach you also some of the tricks of the trade. She may also be able to see the more humane side of the younger man which might not be the case with younger women.

You can become a better man: You can learn for her experiences as to how she handles difficult and awkward situations in life. She can bring her expertise in dealing with tricky financial issues as well. She has seen a lot in life and would like to impart some of the knowledge gained to you so that you may be able to evolve into a better human being. It is truly a great feeling to be able to date an older woman, especially when you meet her at a dating event. You can very well learn from the experience and become a better man.

Good post! Nowadays all people are so busy and don't have enough time for some relationships. That's why online dating is so popular now. It can really save your time! By the way if you are interested in best free adult sites, I can recommend to check this list - https://pure.dating/article/craigslist-personals-alternative-review-15-top-casual-date-websites/

Who said that romance was dead?