Help banish the winter blues by spending time with pets 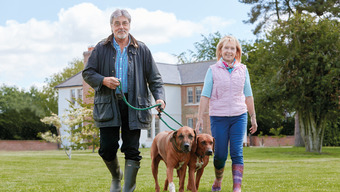 Research highlights that 84% of pet owners said that having a pet had a positive impact on their mental health.Those that don’t own pets can also benefit from spending time with pets by becoming home and pet sitters.

Research by the UK’s leading vet charity, PDSA[i] highlights that 84% of pet owners said that having a pet had a positive impact on their mental health. 95% of dog owners, 93% of cat owners and 91% of rabbit owners said owning a pet made them happy[ii].

Caring for pets helps add structure to people’s lives, plus dog owners get physical and social benefits from walking and interacting with other dog owners. Walking in winter can be particularly beneficial in warding off cold and flu viruses too[iii].

Those that don’t own pets can also benefit from spending time with pets by becoming home and pet sitters. For the majority of our homesitters the main attraction of the role is looking after pets, especially dogs as this is the perfect excuse to increase the amount of walking they do. During the winter months having the excuse to get out walking dogs or exploring a new neighbourhood in the fresh air can help beat the winter blues.

Our home and pet sitters tend to be retired people between the ages of 50 and 70 who decide they don’t want the commitment of owning a pet, but would like to have some interaction with animals. Homesitters look after people’s homes and pets when they go away so this can be the ideal solution.

Other benefits of the role include travelling throughout the UK and exploring new locations with a local base, as they are staying in someone’s home, plus homesitters get a small remuneration to supplement their pension. Depending on how many assignments they take on they can also make significant savings on their own household bills.

Homesitters Anita and Norman Prior were attracted to the role because they love looking after dogs. They both took early retirement in their 50s from the Royal Air Force and are animal lovers. The couple used to have four spaniels and a cat, however when their last spaniel died in 2015, they decided they couldn’t put themselves through that kind of loss again.

Last year the Priors met a couple in a local pub who had a Staffordshire Bull Terrier called Woody. They got on so well with the dog the owners asked if they could look after him when they went on holiday. It was a leap of faith as they didn’t know each other very well but Anita and Norman agreed to stay in their house and look after the dog.

Anita says, “We really enjoyed looking after Woody and we’d forgotten how nice it is to be around dogs and take them for walks – there’s nothing nicer than a dog walking in front of you with his tail wagging!

“Having rediscovered our love of dogs but not wanting one of our own, we realised that as homesitters we could travel the UK, stay in nice places and look after other people’s dogs. We applied to Homesitters and after a face to face interview and reference checks were offered the role.”

Since joining Homesitters in August 2018, Anita and Norman have travelled all over the UK and looked after twelve dogs, three cats, three donkeys and a lake full of wildfowl.

They love the variety of the job from the peace and quiet of rural homesits where they can take long walks in the countryside through to city breaks in London where they can visit new shops, try different foods and meet interesting people.

Anita says, “We also like to keep fit and having a dog to look after gets us out and about, we love taking long walks with them. We don’t always look after dogs though; we had a six week assignment in a lodge on a large estate in Kent with a large lake in the grounds with lots of ducks and swans. Every day we enjoyed long walks around the lake feeding them all.”

“We really enjoy the variety of life as homesitters, we’ve stayed in some beautiful homes in gorgeous locations and there’s always something different to do. We have our RAF pensions which we can live on quite comfortably, but our earnings from homesitting mean we can enjoy life just that little bit more.”