How Delhi’s tattoo culture has evolved over the years 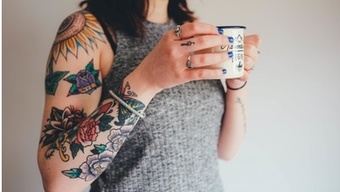 Tattoo making is an art and now that it is being treated that way, is a brilliant sign of progression.

In a place like India, getting a tattoo is a tough decision. The difficulty is escalated because of the fear of being stigmatised in the society. That’s mostly because earlier tattoos were common only among prisoners, sailors and rebels, but things are changing now. Getting yourself inked has become a form of personal expression. The capital city of Delhi is a good example of this, where the streets are not exactly flooded with tattoo parlours, but many have cropped up in the last few years.

Earlier, tattoo parlours weren’t located in posh colonies and those who frequented them were mostly people living on the outskirts. But we now see tattoo parlours opening up in some of the most happening areas of Delhi, be it Devil’zTattooz in the bustling area of Greater Kailash-1 or Body Canvas Tattoos in HauzKhas.

Apart from the location factor, even the group of artists and clients is diversifying. Getting a tattoo done is not just a rebel thing anymore. You can see people from all streams of life like engineers, architects, industrialists, lawyers, college students, etc getting inked. What is even more surprising is that it’s not just the youth but several middle-aged people are getting tattooed too.

Gone are the days when all we saw were religious things or names of our loved ones etched on our skin. People are willing to experiment and shifting away from the mainstream. They are coming up with more and more innovative designs and treating it as a form of self expression. People get tattoos done as a way of rebelling against something or simply for their love of art. Whatever the reason be, a tattoo is permanent piece of art which you carry with yourself, which could actually inspire and direct you in life.

Some tattoo studios doing really well in Delhi are Devil’zTattooz, Tattoos by Mohit, KDz Tattoo, Get Inked Tattooz and others. All these tattoo parlours have some incredibly skilled tattoo artists who make beautiful, realistic portraits on your skin.

We see a change in the kind of equipment being used too. Earlier all we saw was some local artists burning the skin with a needle in the name of tattooing at local village fairs. Sterilisation was never a concern. As a welcome change, tattoo artists now are becoming more and more concerned with hygiene. They believe in a safe and cautious approach and use only the best equipment and dyes. Most of these tattoo parlours offer laser tattoo removal facilities too.

All in all, we see tattooing being accepted in Delhi and it is treated normal. The culture is growing steadily, not just among the young but also the older generation. Tattoo making is an art and now that it is being treated that way, is a brilliant sign of progression.