How Sedentary Jobs Affect Our Health 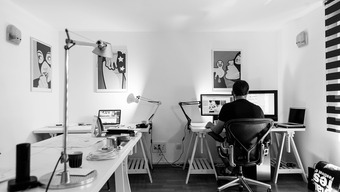 Millions of adults work a typical office job, where they are planted at a desk or cubicle for several hours a day without getting up and moving around.

Most workers who go to an office setting each day do not often think of the negative impact sitting idle for hours at a time has on their health, either physically or mentally. A new survey conducted by AXA PPP healthcare aims to highlight the amount of time employees spend sitting still on any given day, and the serious implications the growing number of hours has on one’s health.

AXA PPP healthcare surveyed 2,000 Brits to uncover the hours spent sitting still each day, culminating in a near nine-hour average for employed adults. Nearly half responded that between four and six hours are spent in a sedentary position throughout the workday, while one-fourth of survey respondents stated that failing to get up and move takes place at least seven to eight hours a day. However, the non-active trend of sitting does not stop at the office or during normal working hours; half of the individuals who responded cited two to three hours each day are spent sitting at home, which almost one-third adding another four to six hours of leisure time after work has ended. Adding to the growing concern over sedentary lifestyles among Brits is the common plight of an extended commute, averaging an hour for most workers. Although sitting during the work day is not altogether avoidable, employees need to be aware of the health risks, both physical and mental, that come with not being active throughout the day.

The human body was not designed to sit still, and so, individuals who lead a sedentary lifestyle face the unnecessary risk of experiencing mild to severe health conditions over time. Within the same survey, nearly 75% of workers cited a musculoskeletal issue had taken hold at some point during their lifetime. This could mean an ongoing pain or ache in the shoulders, the lower or mid-back, or the neck, all which could affect the level of productivity and focus on the job. For some, an ache or pain may not seem like a significant health issue, but sedentary living has the potential to lead to far worse.

Radiance Vein Clinic’s Eddie Chaloner explains that failing to be active throughout the day can cause a host of physical and mental health concerns, no matter an individual’s age. A non-active lifestyle is often linked to serious medical issues, including the slowing of blood flow throughout the legs and hips, as well as muscle atrophy over time. Hip flexor muscles have the potential to shorten when these common problems begin, and deep vein thrombosis (DVT) due to increased clotting in the blood can lead to devastating results for individuals. A lack of circulation because oxygen and blood are not flowing freely throughout the body may also decrease the number of endorphins released in the brain, causing a decrease in mental well-being, too. In the most severe cases, refusing to add physical activity into the daily routine, either on the job of off, could lead to the development of type 2 diabetes or heart disease – both which have the potential to shorten one’s lifespan drastically.

With all the health conditions that can arise given a non-active lifestyle, it is becoming increasingly important for individuals of all ages and levels of health to incorporate physical activity into their daily lives. It does not take a drastic change to behaviour to positively impact one’s health, as simple shifts can make a lasting difference. Medical professionals recommend getting at least a half hour of brisk walking in each day, and scheduling time throughout a nine-to-five job can make this a simple task. Utilizing innovations in workplace well-being, like standing desks and on-site gyms, can also make it easy to complete the suggested amount of active time each day. If taking a prolonged break during a work shift is not an option, setting calendar reminders every hour that prompt standing up or moving around in some capacity can do the trick just the same.

Overall, Brits are facing an increasing risk of developing chronic health issues associated with a sedentary lifestyle, given the growing commute time, longer work hours, and little motivation to move after they get home. However, taking small steps to improve the amount of physical activity each day can drastically reduce the potential for these medical conditions, ultimately increasing lifespan as well as mental well-being both on and off the job.