How to Teach A Dog to Stay, Sit Or Come When Asked: The ABC of Obedience Training 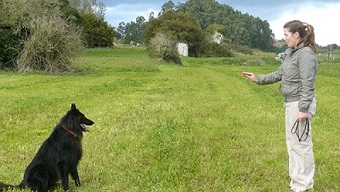 Tips and tricks for teaching your dog basic commands.

Obedience training is very important and should start very early in the puppy's life. All dogs need this in order to learn their place in the pack order. Dogs are very intelligent and can learn a lot of things, like roll over, play dead, fetch the newspaper in the morning or other complex jobs like search and rescue or hunt. But for the beginning, they must learn the basics of listening to their owner's commands.

According to the dog's breed, you may have to use a certain training strategy or another. Some dogs are very patient, while others are not, and some are really stubborn and with a mind of their own. Though, they all need the same thing: a firm, but gentle owner who won't use rough methods. Always keep training sessions fun and reinforce positive behavior with treats and praise.

Below we described the basic commands and how to teach a dog to stay, sit or come when asked.

Teach your dog to come

All dogs must come to their owner when he calls. Most of them do this naturally because they want to keep in touch with their human, but you must make sure they do this whenever you want them to. This would make it way easier to get to leave the dog park without needing to chase your dog around, as well as keep him safe while off-leash.

Never scold your puppy. He may not understand what this "Come here" means, so it's no use. This may even get things worse.

Instead, try calling his name again and begin jogging backwards to encourage him to follow you. During this time, call him again in a joyful tone and keep showing him the tasty treat. Clapping your hands may be useful, as he may see this as a game. Immediately begin praising the puppy as he starts moving towards you.

Teach your dog to sit

This command may be tricky for your puppy to learn or for you to teach him. This is one of the first commands a dog should learn, and will help reinforce the leader - follower relationship between you and him. You must always choose the most suitable method for your puppy's specific breed and temperament.

When you notice he begins getting the command, only reward him occasionally.

Watch out for accidental jumping rather than sitting, or popping out of the position before getting his reward. You may be holding the treat too high, or taking too long before praising him for what he did well. If your dog doesn't sit at all, you may be rewarding him too early.

How to teach your dog to stay

The "stay" command is the other most important command in the starter trio. He must learn to wait until you allow him to do something or go anywhere. This command is also important for you to establish a healthy relationship and teach him who is the leader.

If your puppy leaves his position, immediately say "sit!" or "down!", depending on the position he was in, then try the same command for a shorter time. When he already know the "stay" command but breaks out of his position, you can try saying "stay!" in a sharper voice, like a reprimand. But never punish your dog, or he would associate this with what he was doing before breaking out.

With a bit of patience, obedience training can be really fun. Dogs need to learn these basic commands in order to be well-behaved and to eliminate further communication issues between you two. Remember to never punish your dog, as most of them would associate it with the command itself and would only make training more difficult. Keep training sessions short and fun, especially because puppies have a short attention span and would hardly focus for more that 10 -- 15 minutes at a time.

My friend just told me about puppy training fort worth as I recently got a new dog. I did not have time to train it so this is the reason I wanted a professional to do it for me while I am at the office.