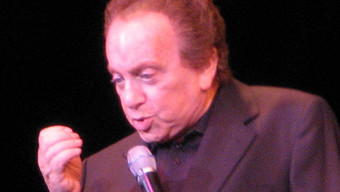 Jackie Mason - end of an era?

When I heard that Jackie Mason’s new show “Fearless” is to be his last British appearance I had to make the trip to Wyndhams Theatre with my wife to catch the legendary 75 year old American Jewish comic.

Don’t go to see him if you’re finicky about PC. He makes an early crack about “Riverdance” being successful because people want to see how Irish people can stand up for two hours. Not nice, but then everyone gets it in the neck – Jews on Ski-ing holidays, scientists, opera singers, Barack Obama, George Bush, the Olympic Games. Acerbity is his trademark, and, besides, he delivers his material with astonishing finesse.

There’s no comedian more fluent than Mason. He breaks up his torrent of words to josh the unwise people who bought front row seats, changes gear and moves on. He provides a masterclass in the use of repetition and rhythm. There were two sublime routines in the first half: one on how much more useful toilets are than movies, and the other a dizzying existential riff on the young Jackie’s trip to a psychiatrist.

There was a downturn in the second half. The bracing put-downs turned into a prejudicial rant. He turned his fire onto wives, who, according to Mason, are only there to deny their husbands sex and drain their bank accounts for expensive presents. Well, naturally. The last time I bought Mervion a Cartier brooch all she did was complain it didn’t match her tiara. This kind of patter wasn’t even true in the 1950s when it was fashionable.

To make matters worse, he delivered his entire two hour set to the front ten rows of the stalls. Up in the balcony, denied even a glimpse of his eyes, we felt increasingly disassociated from the stage. People became more and more fidgety. The speakers were too low and he seemed under-energised (although, to be fair, he did say he hadn’t been well)

Mervion found him mean-spirited and untruthful. I couldn’t disagree. Mason may be the last surviving figure of a great tradition of Jewish comedy, but his act proved that traditions need to move on to survive.

It was a privilege to see a great comedian’s mastery of timing and delivery. It’s just a shame that his material has such little resonance in the twenty first century.

"Fearless" continues at Wyndhams Theatre in the West End until 17th March.

Jackie Mason gave his last appearance in Fearless in 2012 and from that time his fans really miss him. His sense of humor is pretty great. Online coursework help uk always makes me to get higher grades. The way he manages to entertain whole audience is really incredible.

My father was a big fan of him.

What a great post on Jackie. I'm a huge fan and wanted to thank you for sharing this post about him. Thanks Mesa

This legend was one of my Mom favourite. I will always remember the first time I saw him at our family house in Terrebonne. Since then I think I saw all his YouTube video. Great article thank you for remembering me such a great souvenir.

Great post! I am actually getting ready to across this information, is very helpful my friend.
router login

Different brands are working online for giving us best options even in range of trouser too. Some iamfeelingblog.com companies also like to send you offers and promotions code too. So that, you also prefer to shop with them even in future too.<!--td {border: 1px solid #ccc;}br {mso-data-placement:same-cell;}

Absolutely fantastic posting! Lots of useful information and inspiration, both of which we all need!Relay appreciate your work. With game, you can give a striking new look.  san antonio guitar lessons

The cemetery is the end of our lives. We all come in this life for making our final life happier and peaceful. I use the http://www.savorysuitcase.com/ for solving my papers. We should always prepare ourselves for the upcoming day, which all of us have to face.

Energy management can likewise be characterized as the science including arranging, coordinating, con­trolling the inventory and utilization to www.empoweredautomation.com/ of energy to expand profitability and comforts and limit the energy expenses and contamination with cognizant, prudent and compelling utilization of energy.