Online dating- 5 steps for over 50s to be successful 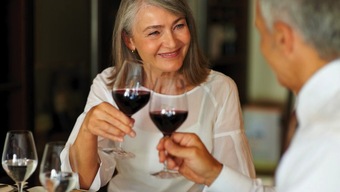 I first started dating online in my early 50's. At the time, I had no idea of what to do in order to make the best out of the online dating websites I navigated in - so I made all sorts of mistakes I'll describe here to you in hopes that you'll avoid.

Now I look back and cringe thinking of how I allowed any man to make me their phone pal, or e-mail pal. Worst of all, I was really thrilled by it. I thought that, if they were picking me over every other woman at the website, I was supposed to at least let them ramble about themselves and their lives.
Every single night I'd talk to them, and I would tell myself I was doing the right thing - but of course, not a single date came out of these nighttime talkers.
I had to figure out the lesson of how to set boundaries the hard way. Even harder was learning how to move men I found interesting through the process in order to get dates with them. The thing is, you don't have to learn this stuff the ward way like I did. I want you to be able to learn from my mistakes, and take the tips in these five steps in order to move from "Oh, that guy is cute" to "Sure, let's go out again!"
First step: Do not ever choose "the one" according to an online profile.
Truth be told, it's easy to look good on paper. A man can often give the impression of being someone else entirely when they present themselves at the website, but when you actually meet them in person you begin wondering what happen to that interesting men you found online.
Do your best not to have expectations or pictures of who you think the person you're meeting online is until you've actually met him. Otherwise, you'll likely get the wrong impression from his profile based on a couple of paragraphs and a tiny profile picture, and this is setting yourself up for disappointment.
Second step: Making contact
Usually, it's best to let the men contact you. Things haven't gone too well for me when I was the one to initiate contact, although I know of good relationships that were initiated by girls. Feel free to try if that's your thing and you're interested - but make sure you aren't attached to him or to whether he writes back - as this is already a big turn off.
On a similar note, avoid e-mailing too much - five e-mails each is the maximum, otherwise you're becoming his pen pal, which is never a good idea. If the man sees you as a friend, it's almost like you become a man to him, and it's unlikely that they'll consider you a potential romantic partner.
Third step: Use the phone
Hearing the way someone speaks and the sort of thing they say can be a dead giveaway of any obious deal breakers. This makes the phone a perfect opportunity to screen a man, and avoid any negative surprises when you meet him in person. Once again, avoid letting the conversation go on for long enough that you feel like phone pals or friends, since this kills romance easily and goes nowhere.
Fourth step: Getting a first date
If a man sounds nice on the phone and going out with him still seems like a good idea after a few conversations, it's time to meet in person. Usually I recommend going out for coffee or tea, since meals take long and can be exhausting, and you can't make an early leave if things go awry.
Another upside of a shorter date is that it leaves a bit of mystery and intrigue for the next one. If you'd really like your first date to be a meal anyway, it's a good idea to limit it to less than two hours, even if you're having a good time.
Fifth step: Getting the second date
It's not just you that paints the man's picture in your had - the man does exactly the same thing, setting up ideals about the woman he's looking for. If you don't fit his picture, there will likely not be another date - but that's ok! It's not about you, it's about him and his needs. Think about every single guy that you've turned down because they didn't fit your ideals. Any of them might be the perfect man for another woman - but not for you.
The best mindset is to treat every date as a way to get to know a new person and of course finding a top dating site that can help you find love, with online dating reviews, and just see if they'd be a nice fit for you or not. If they don't contact you or ask you out again, don't insist by writing, calling or texting him. Just move on to the next guy - eventually, you'll sure find someone who wants you in his life, one you won't have to push to ask you out a second time.

My friend constantly asks me where I find new partners and change them once a week. I advised him to go to the site https://datingseeks.com/reviews/citasconlatinas-review/ and read a review about a very cool service there. I have been sitting there for 2 months and new people constantly write to me, it's very cool!

Who said that romance was dead?