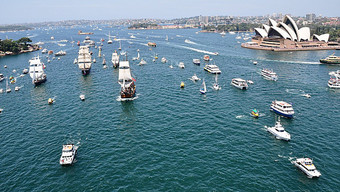 Australia is a country that offers so much; from a diverse culture, interesting history to strange animals. The Australian wilderness is breathtaking especially the beautiful starry skies that are a must see.

I have always had an incredible desire to visit the wonderful “Land down under”, continent separated from the rest of the world. Three months ago, I had a chance to travel to Australia, and to immerse myself into the spirit and the overall feeling of this wonderland. This text is a short summary of my experiences there, and I will try to evoke those ravishing memories. Feel free to close your eyes and relive these memories with me.

Being mostly covered in desert soil, Australia from the very beginning surprised me. To be honest, I expected something similar to the Sahara desert, but in fact most of the Australian surface is covered in bushes, similar to American prairies. For being in a very hot climate, the land itself is dry and scarce. But, to the North, you can find actual rainforests, home of the grand eucalyptus, and koalas, the most distinctive symbol of Australia. In the central area, i have seen kangaroos, as well as packs of dingoes, wild dog-like canines, which resemble somehow to American coyote.

Many people living in Australia are descendants of the first colonists, which inhabited this continent from the late 18th century. What fascinated me the most, were the natives of Australia, the Aborigines. By being here for the last 40.000 years, they created a very unique culture, with the center based upon “Dreamtime stories”, an astonishing and wonderful tales about the beginning of the world. The only thing that was awkward to me is that people were driving on the left side of the road, so in order to function properly I had taken driving lessons to tone my skills.

Among the Aborigines, cuisine is consisted from fish, wild berries and venison. In the cities, however, the story is quite opposite. Typical Australian cuisine is heavily influenced by the British, but also during the last two decades numerous immigrants made an impact, so it represents a unique mixture of plethora of nations. I can highly recommend the Australian wine, which comes from the South. Being  one of the greatest I have tasted, it made an incredible impression on me. The wine is such good quality that in 1995 an Australian domestic red wine won a Wine of the year award.

From the beginning, Australian culture had been influenced by Anglo-Celtic one because it was a part of the British Commonwealth until 1931, when all the ties with the British Empire were severed. From that point, and with the ever-increasing number of incoming immigrants, Australian culture transformed. It has been influenced by the vast array of cultures, and it represents a unique mixture. The most recognizable symbol of Australia is of course, the Sydney Opera house, which will greet you with its white sails from the Port of Sydney, as you approach.

So, with everything said considered, the only thing you should consider is whether you will be traveling by sea, or by air. If you choose airplane, book your ticket today, and if you choose ship, then, set sails, and get ready to be astonished.

Australia contains various beautiful things waiting for us to explore. Australia offers diversity of cultures, strange animals like kangaroo, and very interesting history. Visit casinosapproved.info/no-account-casino/ if you want to have fun in casino. Wild beauty of Australian land is also worth able to watch.