Scotland holds the UK’s unhealthiest hearts, according to new analysis 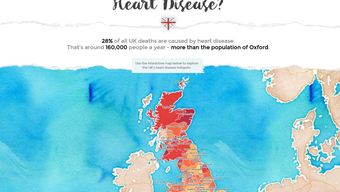 An average of 1760 people in Glasgow alone die each year from cardiovascular disease, or 400 for every 100,000 population. The research, undertaken by life insurance specialists British Seniors, used data compiled by the British Heart Foundation to collate a shocking map.

Have you ever stopped to consider just how prevalent heart disease is throughout the UK? It kills 160,000 people every year, which equates to more than the population of Oxford. Yet we continue to underestimate it as a potential killer, as new analysis of official figures show.

Statistics compiled by the British Heart Foundation reveal that the highest levels of fatal disease are found in Scotland – in fact, five out of the top ten and nearly half of the top thirty hotspots for high heart disease are north of Hadrian’s Wall.

The study, which was carried out by life insurance specialists British Seniors, also discovered that Glaswegians in particular are more likely to die from the disease than anyone else in the UK. An average of 1760 people die of heart disease in the city each year.

By comparing levels of fatal heart disease in all UK local authorities and ranking them according to their age-standardised mortality rate, the company was able to create an interactive map of the UK showing the number of deaths caused by the disease in each area.

The worst-affected areas are shown in red, and the green fields of Scotland are rendered unrecognisable by the crimson tide sweeping over them. Scotland’s most heart-healthy area, East Dunbartonshire, only comes in at 101st in the local authority rankings, demonstrating the extent to which heart disease blights the nation.

Scotland’s unhealthy heart record is not the only striking observation that can be made from the map, however – there are a number of surprising facets of the UK’s battle with heart disease that are thrown up.

Conversely, England looks to be much healthier, especially the further south you travel. London (notably Kensington & Chelsea and The City, where the mortality rate is two times lower than that of Glasgow), the South-West and the South-East all feature prominently in the list of the top ten heart-healthiest local authorities and perhaps this highlights certain key differences in terms of diet, culture, lifestyle and social factors that are prevalent in the North and the South.

While Wales might not be the first country you’d think of in terms of high levels of heart disease, the map shows that, in fact, almost every region of the country is struggling with deaths attributed to heart disease. Only the Vale of Glamorgan appears to be in a state of heart healthiness.

There are a few interesting juxtapositions in terms of adjacent local authorities, such as Peterborough and Huntingdonshire and Scarborough and Hambleton, showing very high and very low levels of heart disease respectively. This is interesting, as you would expect areas close to each other to be more or less the same.

The new analysis of these figures confirms some assumptions (the South having the healthiest hearts) and highlights oddities (Wales having high heart disease levels), but in the main it paints a clear, if complicated, picture of heart disease throughout the UK and shows where the public and health services have to pay attention to those at high risk.