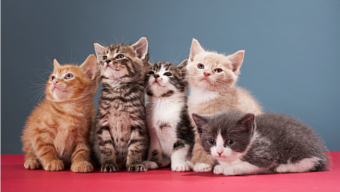 Ah, cats. Like dogs, only much more willing to just let you die. But there are many surprising facts about our moggy masters, so sit down, get up again to feed the cat, sit down again, get up to shout at it for using the hi-fi speakers as a scratching post, sit down once more, realise the cat wants out and get up again, and then – finally – sit down once more and let these ten top facts astound you!

2. Not at all overrated Pink Floyd album, "Dark Side of the Moon", is in fact 45 minutes of cats screeching. The sound engineer in the studio accidentally recorded the noise (made by next door's cats doing an A Capella Wishbone Ash tribute) when the 'Floyd was laying down tracks. Fortunately, an early form of auto-tuning saved the day and made the screeches sound like several public school boys contemplating their navels instead.

3. Cats with microwaves are a growing menace in Senegal.

4. The same cat has been used in the Coronation Street credits since 1963. How it has stayed alive for so long is not known, though its links to Manchester's most dangerous Ninja Clan may in some way be related.

5. Cats can't play chess and are widely suspected of cheating at Monopoly.

6. Ginger cats don't in fact exist and are a psychic mirage generated by the collected minds of all other cats. Were this illusion to be removed, the true horrific nature of the universe would be revealed, plunging humanity into screaming madness. So in a way, they're doing us a favour.

7. Paraguay's goalkeeper in the 1986 World Cup was actually a small, fluffy kitten. This is widely accepted as the reason they were knocked out of the last 16 by England, not helped by the kitten wandering off midway through the second half to play with Glenn Hoddle's shoe laces.

8. Cats are banned from juggling in most NHS hospitals.

9. The largest animal caught by a cat was a 53 year old estate agent called Derek. The cat's owners managed to save him, however, and he was successfully released back into the wild.

10. Luxembourg is in fact an enormous cat curled up into the shape of a country. Citizens of the Duchy are legally obliged to stroke the ground every Friday to make their nation purr and not get up and chase after Denmark.

I am meeting all the gang again next week because we are all starting our rehearsals for the “Strictly Christmas Special” It will be fabulous to see everyone again and it will definitely be a “Must See” in everyone’s Christmas viewing schedule.

Those facts sound very cute. I even didn't know this. But personally I like dogs more than cats. To my mind they are much kinder.