The lesser-known curry dish you NEED to know about 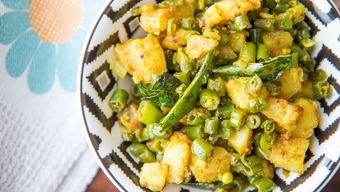 India has a number of famous curries to its name – from the tikka masala to arogan josh, bhuna and dhansak, and even vegetable dishes such as matter paneer and sag aloo, these are all names that most of us know and love.

But in order to get a true taste of authentic Indian cuisine, it’s worth seeking out some of the lesser-known curries that are enjoyed throughout the country; one of which is a vegetarian dish called undhiyu.

The origin of undhiyu takes us to Gujarat, an Indian state that is known for its vegetarianism – largely the result of Jainism and Hinduism being practiced in the region. Vegetables are the main component of much of the food eaten in this part of the country, although there is a wide variety of spices and flavours that make these vegetable dishes just as exciting as those that contain meat.

A defining characteristic of food that originates from Gujarat is the distinctive balance of spicy, salty and sweet – a flavour combination that is noticeable in undhiyu.

Undhiyu is a true speciality of the Gujarat region and is eaten in most households there. The name itself stems from the two Gujarati words‘undhu’ and ‘matlu,’ meaning ‘earthen pot’ and ‘upside-down’, which makes more sense when we learnhow this dish was traditionally made.

For centuries, undhiyu was cooked in large clay pots, which were turned upside-down and cooked on an open fire. While many villages still use this traditional cooking method, it is more common to see cooks today making their undhiyu in a pressure cooker.

At its heart, undhiyu is a hearty vegetable stew that’s packed with flavours and spices such as cumin, turmeric powder and coriander seed. As well as the vegetables, the dish is bulked out with lentils and given a delicious sweetness with the addition of grated coconut and palm sugar. To serve, it is usually garnished with more grated coconut and chopped peanuts, and served with a rice accompaniment.

One of the great things about undhiyu is that it can be adapted according to the seasons and what ingredients are available. For example, in the winter in Gujarat the recipe would include baby brinjal (aubergine), broad beans, surtipapdi (fresh green beans) and unripe banana. But if a particular vegetable isn’t available, it can be substituted for something of a similar flavour or texture.

As well as being a standard dish eaten in Gujarat homes, it is also served at most weddings across the state, reflecting just how much significance it holds. Undhiyu is served to wedding guests as just one element of a celebratory feast, though in this instance it is called surtiundhiyu and is served with puri, a type of deep-fried bread.

If your taste buds are tingling for undhiyu, or just for something a little different than your standard high-street curry, head to the most popular Indian brasseries in London. With chefs who specialise in authentic regional dishes, you’ll be sure to find your new favourite curry dish.

Do you know the benefits of Grape-fruits

A defining characteristic of food that originates from Gujarat is the distinctive balance of spicy, salty and sweet – a flavour combination that is noticeable in undhiyu.