The Real Cost of a Pint of Milk 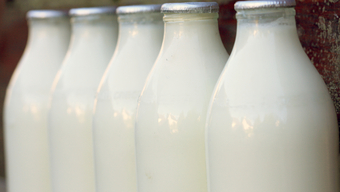 UK Dairy farmers faced a huge crisis last year when prices of milk dramatically fell in supermarket across the nation.

The reduction of milk prices to the point of it being cheaper than water saw dairy farms shut down in their thousands.

While the it grabbed headlines over the summer of 2015, the crisis has not gone away, with the UK dairy industry still drastically struggling to keep afloat.

The initial crux of the issue was that supermarkets, the main source of dairy sales, began charging less for milk and in term began paying farmers less than the cost of production in return.

To get a clear understanding of how those price changes effected farmers, right down to each pint, check out this great infographic from Shield Agriculture.

In August an emergency meeting was called, brining all of the major supermarkets together to discuss what could be done between them to help stem the crisis.

They agreed to up the amount which farmers would be paid for their milk to at least 23.66p per litre, with ASDA saying they’d up there’s to 28p a litre and Morrison’s to 26p.

Despite this realisation of their prices massively effecting the UK dairy farmers, it still wasn’t enough to cover production costs per litre according to the National Farmers Union (NFU).

Some dairy farmers urged shoppers to buy straight from the source, thus cutting out the Supermarkets, suggesting that it is the cheapest possible way to get your milk.

However, the issue with this was that it only really played to a crowd with a conscience as the milk direct from farms was actually more expensive than that from the supermarkets.

Despite the best efforts of certain supermarkets and campaigns from the NFU, ultimately the financial situation still fell on the heads of the dairies themselves who dictate what money the farmers actually receive.

The result of this has meant that the amount of dairy farms over the past decade has been cut by more than half from around 21,000 to less than 10,000 (figures from the Agriculture and Horticultural Development Board), clearly an alarming statistic.

As it currently stands, the unfortunate news for those still working in dairy farming is that things haven’t really improved since last August.

In fact, predictions from leading experts like the Carrs Group have shown that the industry might well be in for at least another two years of struggle before things will improve in UK dairy farming.

The positives to take from the most recent figures include a rise in the amount of money farmers are receiving per litre of milk.

The overall average farm gate figure has risen to 25.57p per litre (as of February 2016), which is an overall increase of 11pc compared to December 2015, which is at least a step in the right direction.

The dairy farmers which still fight the good fight won’t need telling that things aren’t exactly back to how they once were, however good work from a number of parties has ensured that the damage has somewhat been reduced.

In the United Kingdom, websites such as reborn dolls uk are leading the way when it comes to highlighting the newest and best reborn dolls for sale.

Welcome to a world where dream comes true, Saya Gold Avenue, a RERA registered project, located in Indirapuram, Ghaziabad. Saya Gold Avenue is a property that available for you with the best option for the combination of luxurious, comfortable & homes priced at the unbeatable market rate. It is a 2/3/4 BHK property in Ghaziabad which you can call falls in love with thinking for your new home.