The Rise of Silver Splitters as Over 60s Divorce Rates Skyrocket 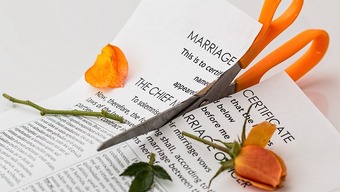 New statistics have revealed that more over 60s than ever before are now divorcing in the wake of numerous different social changes and a shift in attitudes. Whilst the trend was first noticed in the 1990s, it is in recent years that the number of divorcees over 60 has skyrocketed.

Whilst longer life expectancies have had an undeniable impact on divorce rates among silver splitters, the rates have been magnified following changes to social attitudes and expectations surrounding marriage.

For decades there has been a huge stigma attached to divorce that has pressured people, especially women, to stay in unhappy marriages. But as advocates for equality, campaign for change and society advances, the stigma has begun to lack authority.

Alongside the deep-rooted stigma, in the past women haven’t been granted the same career opportunities as men have and this had led to a decrease in divorce rates as a result of financial dependency. Thankfully, these days, isn’t the case and women are able to support themselves financially through paid work and pension schemes and this has resulted in greater independence which has in turn, increased divorce rates among those aged 60 and over.

Another reason cited for the increase in divorce rates of those aged over 60 is an ageing population. People are now living longer thanks to technological and medical advancements, and paired with an absence of responsibilities that once came with dependent children; over 60s are now taking time to focus on their life ahead of them and this very often means cutting ties with their life partner.

But it isn’t all sunshine and rainbows for diamond divorcees, as they have more than likely spent a number of years saving and investing with their partner and therefore have a lot more at risk financially. For most over 60s, pensions will be the sole source of income (unless of course you have funnelled your money into some savvy and seriously lucrative investments).

Pensions are divided in this way through a Pension Sharing Order where the court decides whether assets and future incomes will be equally divided, or whether one party will be awarded a greater share of the assets in lieu of pension sharing.

Just like with any other divorce proceedings, each party must disclose details of their financial circumstances, including pension values, in order for the court to reach a fair financial settlement decision. Once a party has become a member of the pension scheme, or their credit is transferred into a new scheme, that persons pension cannot be affected by any circumstances of their ex-partner.

With predictions suggesting that those aged 60 and over in the UK will account for 25% of the population by 2031, paired with the greater freedom and flexibility granted to silver splitters, we can expect divorce statistics among over 60s to continue increasing in the coming years.