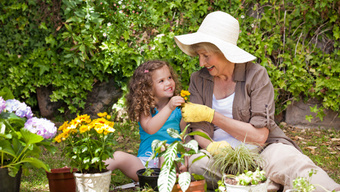 Everybody knows that age brings wisdom. Passing that wisdom down through the generations is a great way for the elderly to bond with their grandchildren.

Everybody knows that age brings wisdom. Passing that wisdom down through the generations is a great way for the elderly to bond with their grandchildren. Many of the things that people remember from the past seem mundane to them because they lived through those events themselves, but they are novel and fascinating to people who came later, so they offer a lot of potential for bonding and education alike.

Most people under the age of ten cannot remember a time when people didn't have phones that could get on the Internet. Most people under twenty have a hard time remembering the days before computers. Widespread adoption of computing technology changes the way that people live to an almost unprecedented degree, and it touched almost every part of daily life. Explaining the way that people used to do things in the days before computers is one of the best ways to start teaching grandchildren about the past because it is so different from what they are used to doing. Strange things are interesting things, so they will pay attention and start to learn.

Societies and people change over time, but it doesn't always seem that way to people who were not around to live through the change themselves. Prior decades saw events like the Civil Rights Movement and the Cold War. Those are just events in a history book to people who were born after they ended, but many of those people have grandparents who can remember living through them. That kind of experience is impossible to transmit through a normal textbook, but it's very useful for understanding history as people experienced it. The textbooks can list specific events, when they happened, and even why they happened, but they don't explain what it felt like to experience them. Making people understand that is the key to making them understand the past as a part of the human experience rather than an abstract list of events.

How to Avoid Mistakes

Mistakes are inevitable in life. People can learn from their mistakes, but they can also learn from those of other people, which means that grandparents can save their grandchildren a lot of pain if they take the time to explain what they did wrong during their lives. It's best to focus on things that are universal and don't change much over time, like dealing with other people, rather than financial or technological mistakes. Those things change so quickly that what went poorly for a grandparent might go perfectly for a grandchild, while the ways that humans treat each other and how they feel has barely changed at all. Sharing the mistakes along with the successes is the key to passing wisdom down through the generations.

David A. Waddell has spent his life helping people lead more fulfilling lives. Most recently, he has been associated with Roseville Home Care. He is happy to accomplish his passion for improving the lives of seniors through the written word.

The best article I read on your site because it's history base content. It's best for history students to get the stuff that how our grandparents share their knowledge with their grandchildren. I always take this experience from my grandfather who tell the about the old technologies and now people can hire a dissertation writer to complete their assignment. Thanks!