Top 10 Cafes to Visit Around Europe 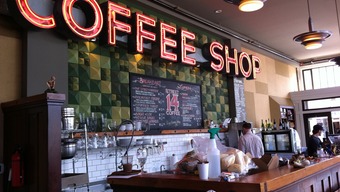 Lovecrumbs, Edinburgh
Just outside the bustling Grassmarket area lies this cozy café where you can choose from a plethora of freshly baked cakes, pies, tarts and scones. There is never a “usual” at Lovecrumbs, but always something delicious to try. One day there are peanut butter and chocolate scones and the next there is fluffy cake with lavender
icing. If you’re also looking for a café that supports local businesses, Lovecrumbs is known for its coffee from Edinburgh’s Artisan Roast and its tea and décor from Edinburgh’s Anteaques.
Workshop, London
Workshop is the coffee place for both coffee aficionados and coffee newcomers alike. In its short, four-year existence, Workshop has been voted both “Best Independent Café Europe” by Allegra Symposium and “Best Independent Café” at the 2012 Café Society Awards. Due to the success of Workshop, there are now four locations throughout London where you can enjoy their prize-winning drinks (including gourmet italian coffee from Chiswells). They even offer master classes where you can learn how to brew the best cup of coffee possible in the comforts of your own home. This is very apparently the coffee place to seek out while travelling through London.
La Granja, Barcelona
This hidden away gem is perfect for the tourist looking to find something a bit more quiet and quaint. La Granja is particularly known for its dark hot chocolate and its partnership with Xurreria where you can buy a churro to go along with it. Additionally, the café offers its own alternative to churros called Melindros, a more Barcelona-type cake. If you’re looking for a unique experience during your time in Barcelona, La Granja should be on your list.
Pastèis de Belèm, Lisbon
While this is one of the more popular cafes to visit in Lisbon, it is one that will definitely be worth your trip. It was at this particular café where the custard tart was invented and now sells over 20,000 of them per day. These classic Portuguese treats have been churned out by the family owned business since 1837 and are
considered to be the best in the world.
Café de la Paix, Paris
This historical café was built in 1862 and has served as the luxurious meeting point for many celebrities and even royals throughout the centuries. If you’re in town for the opera, this café is perfect as it sits directly across the plaza from the Palais Garnier opera house. Here in Café de la Paix you will find pastries that literally look
too good to eat. Enjoy the treats you can find here while sipping on any of their wide selection of wines.
Café Restaurant, Amsterdam
In this 19th century engine room, Café Restaurant opened its doors in 1996 to give life back to this beautiful space. Feel free to go to this café at any time during the day as they serve from ten in the morning until midnight. Anyone who goes here constantly remarks upon the brilliant atmosphere this café maintains in its historic building. To many, this has become a perfect place to relax from their trip with a coffee and true Amsterdam atmosphere.
Antico Caffe Della Pace, Rome
This café is one of Rome’s tried and true gems that has served tourists and celebrities alike since opening in 1891. It is world renowned for its moody and old-fashioned atmosphere where you’ll feel transported back in time. Recently, there has been some threat to the classic café as the owners faced eviction so as to turn
this beloved place into a hotel. So far, there has been massive outcry against such a loss. But put this café on your list now unless it is gone forever.
Sosta Espresso Bar, Stockholm
If you ever search for Sosta on TripAdvisor, you will mainly see reviews stating, “Best coffee in Stockholm.” At Sosta, the baristas will only serve you coffee that is made and poured perfectly. If it is not made up to their standards, they trash it and start over. With this, the baristas makes sure they are giving you the best possible
espresso. You can go there confidently knowing that they really will serve you the best coffee in Stockholm.
Café Central, Vienna
This is the café to go to if you really want to engage with Vienna’s history. Opening in 1876, Café Central has served many famous guests that will surprise you. Figures such as Sigmund Freud, Leo Trotsky and even Adolf Hitler have been known to inhabit this historical café. Even without its rich history, Café Central is simply a beautiful place to enjoy a cup of coffee. You’ll feel like you’ve stepped into Vienna’s past yourself.
Café Imperial, Prague
Franz Kafka is just one of the notable patrons that has visited the 100-year-old Café Imperial. This is not your normal café, though with its defining elements of the original 20th century mosaic ceiling and touches of gold throughout the entire space. All food on the menu is made in-house to give the customers the purest and freshest ingredients.