Top 5 Destinations to Book a Date with Bengal Tiger 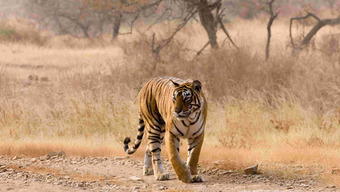 Do you want to know the best destinations to spot Bengal tigers this summer season.Your search ends here.Here I have created a comprehensive list of some of the renowned Tiger Reserves in India.

When you speak of wildlife, for many in India it begins and ends with tigers. It is not their fault actually, because there are so many legends and famous anecdotes associated with the tiger that it gradually ended up modifying the psyche of the public. Also the famous hunter-turned-conservationist Jim Corbett almost did nothing to weaken this strong tiger fixation among the public; if anything he only managed to take this tiger fixation a level higher through his many rendezvous with this cult animal. Not that anyone is complaining though. Being the apex predator and king of the jungle, the tiger moves with the kind of gait that not many dares to. So, if you are also fascinated by this peerless predator, we have a list of places where you can best watch this animal ready.

The first park to introduce Project Tiger initiative in the country, Corbett has always been in the forefront standing up for the protection and conservation of tigers. This inherent goodwill towards the tiger flows through every vein of Corbett and the tiger roam freely without fear and in their natural environment. Dotted with stunning landscapes and many species of plants, the park soothes the mind and soul. Some of the animals that would keep you busy here, beside the tiger, include the jungle cat, sloth bear, fishing cat, leopard, Bharal, Himalayan tahr, serow, chital, sambal, barking deer, and goral.

Best time to visit: Between March and June

How to reach here: The nearest airport is at Patnagar, 50 km away from the park.

This Park holds the distinction of being one of the most picturesque parks in the country and to go with it has some incredible animals; of course the tiger is the biggest attraction of all. Apart from the tiger, the park is home to a wide variety of rare and endangered animals including the likes of leopards, sloth bears, hyenas, jungle cats, jackals, and Indian foxes.

Among the largest parks in the country –it occupies an area of 1,334 sq km –the topography of the park nurtures a rich array of plant species as well, while the geography interspersed with craggy hills is also one of startling beauty. What is unique about the park is that you will find many interesting remnants of a bygone era inside the park; one of them is an ancient fort which has now turned out to be a favorite haunt of tigers and leopards.

Best time to visit: For spotting a tiger, the best time is from April to May

How to reach: The nearest airport is at Jaipur, some 132 km from the park. From the airport, regular buses ply to the park.

Bandhavgarh National Park: This wildlife sanctuary, located in the state of Madhya Pradesh, happens to have the highest density of tigers in the country. Spread across 100 sq km of lush and thick forests, you are more likely to spot a tiger here than anywhere else: on last count more that 50 tigers have been recorded at the park.

Surprisingly the park is also famous as the land of the white tigers, though no white tiger has been a resident of the park for quite some time now. In fact the last time a white tiger was spotted was way back in 1951, when the Maharaja Martand Singh of Rewa captured it. Apart from the tiger, some of the other animals calling the park their home include sambar deer, barking deer, chital deer, four-horned antelope, wild boar, Indian Bison, wild dog, leopard, bear, and blue bull.

Best time to visit: The best period to spend time with the tigers is between April and June.

How to reach: If you are travelling by air, the nearest airport is Jabalpur Airport, which is 147 km away.

This park may not be as famous as the others in the list, but if spotting tigers is what all that matters to you, don’t ever overlook this park. The good thing about this park is, being relatively new (established in 1981), it doesn’t see the kind of footfall as is the case with the other parks; as such you are mostly alone by yourself and the animals, and the moments are private. The tiger is the biggest attraction of the park, closely followed by animals like hyena, leopards, mouse deer, gaur, barking deer, chin Kara, wild boars, wild dogs, bears, foxes, flying squirrel, black bucks, sambar, and chita.

Best time to visit the park: For spotting tigers, the best time is from April to May.

How to reach here: The nearest airport is 135 km away at Bhopal.

Another destination that any tiger lover should hit is the Kanha National Park, which has been immortalized by Rudyard Kipling in his book the “The Jungle Book.” The striking features of the part, apart from the famous tiger, include its extensive open meadows which are roamed by practically all the who’s who of the park’s wildlife. Some of the other wild animals of Kanha include the leopard, common langur, jackal, wild pig, three-striped palm squirrel, black buck, striped hyena, porcupine, and mouse deer. Another native of the park is the hard-ground barasingha, which is an endangered deer species and very popular among the visitors.

Best time to visit: Come here between April and June to have the best date with the tigers.

How to reach here: The nearest airport is at Jabalpur, about 175 km away. It is a three-hour ride from the airport to the park.