What does Benidorm offer the over 50’s? 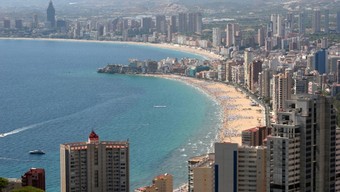 Although it may be a famed as a family orientated holiday hotspot, Benidorm has always been a popular destinations with tourists over the age of 50.

The resort first became popular with British tourists during the boom of the package holiday and the “bikini revolution” of the 1950’s and has remained one of the visited areas in Europe ever since. Despite a blips in popularity, Benidorm has risen back to the dizzy heights with over four million tourists visiting each year.

To find out more about the tourism behaviour of Britons aged 50 and above, Gala Bingo undertook a survey revealing over 56% of elderly participants would either consider going, or have already been to Benidorm on their holidays.

Situated on the Costa Blanca coast line, the area has warm temperatures throughout the entire year – even January never seeing anything below 12 degrees – and 80% of those who took part in Gala’s research stated that the weather was the main reason why they love Benidorm. Thanks to its southern location and being protected by high mountains, the resort escapes the cold northern wind which batters other areas of the country over the winter. Across the peak months of July and September, day time temperatures can reach upwards of 30 degrees, with the evenings being a warm 20 degrees, so you’d never be in need of a jumper or cardigan.

Benidorm is the epitome of British culture abroad, offering a whole host of classic English pubs, takeaways and clubs down its famed strip. But away from the bright lights, the resort has a fantastic variety of Spanish taverns offering traditional tapas and paella dishes. Off the beaten track, you’ll find Paneli’s restaurant in the Old Town which is highly regarded amongst tourists, and if you are looking for a taste of some authentic cuisine, La Cofradia Vinos Y Tapas offers some of the finest tapas in the entire Costa Blanca region. With 50% of those over 50 from the Gala survey stating that Benidorm’s value for money was the main reason for holidaying there, the dishes in both restaurants are well priced and of a very high quality.

As well as the sunny beaches and fine cuisine, Benidorm offers visitors a wide range of both entertaining and cultural attractions for those looking to explore the region. Voted European Cabaret Venue of the Year, the Benidorm Palace is a must visit. Costing around €50 per head, covering the meal and the show, visitors can enjoy a fine display of singing, dancing and musical acts whilst sipping on locally produced alcoholic beverages. For a slice of Spanish peace and tranquillity, Aiguera Park is situated in the town centre and visitors can take in the Julio Iglesias auditorium, as well as bask on the many green spaces.

Benidorm is back as one of the tourism hotspots for the over 50’s, however Gala’s research has revealed that almost 80% of participants felt the resort is only ideal for holidaying and wouldn’t see themselves living there all year round.