The TV favourite gets a welcome big screen outing and delivers cinematic structure, impeccable period detail and a well-paced story that offers us the chance to step through history - and into the gorgeous grounds of Downton Abbey. 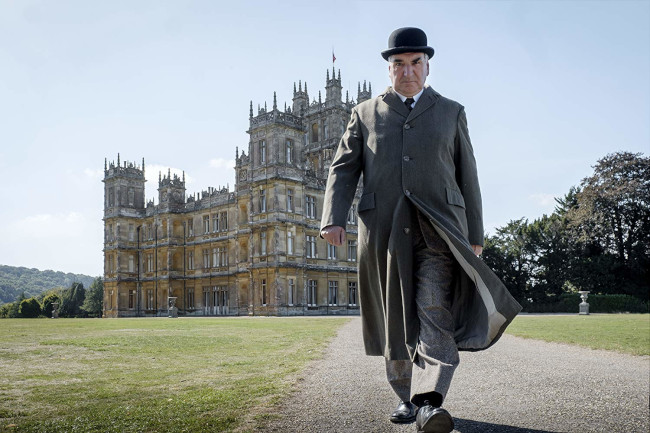 It was one of the most successful television programmes of all time, but after six award-winning seasons Downton Abbey came to an end in 2015. Inevitably it would transfer to the big screen and now Michael Engler's eagerly awaited cinematic spin-off entitled simply Downton Abbey (nationwide release) has arrived, reuniting us with all our favourite characters of the tv series.

The film's strictly notional plot has King George V (Simon Jones) and Queen Mary (Geraldine James) planning a visit to the giant, stately pile of the Crawley family during their 1927 tour of Yorkshire. The news sends the aimiable lord of the manor, Robert Crawley (Hugh Bonneville), his American wife Cora (Elizabeth McGovern) and their modern-minded daughter Lady Mary (Michelle Dockery) in a spin: nothing less than the house's reputation is at stake. Consequently there is a flurry of silver-polishing, meal planning and spring-cleaning to ensure that everything is ship-shape for the monarch. The tension in the servants' quarters is then magnified by the arrival of the exacting royal butler (David Haigh) who casts a gimlet eye over arrangements and exposes everyone's shortcomings.

Things are no less frantic above stairs. Lord Grantham has stepped back from day-to-day management of the estate and put his daughter, Lady Mary, in charge of the visit. She in turn recruits now-retired butler Carson (Jim Carter) to oversee the staff. Lady Edith (Laura Carmichael) takes a break from her publishing career in London, and the Dowager Countess (Dame Maggie Smith) doles out stinging one-liners at a sprightly stern 85.

Anyone not familiar with the ins and outs of 'Downton' may get a little lost in its small army of characters and their already half-started plot lines. But prior knowledge of the show isn't essential. And besides thisd is a movie that knows what its core audience wants and provides it in spades. Everyone gets their moment to shine, and Maggie Smith's acid-tongued Dowager Countess gets about 17 of them. Her catty rivalry with Imelda Staunton's similarly formidable aristocrat Lady Bagshaw and her snarky asides are the true highlight of the film. Smith steals every scene she is in, trowelling each line with ironic disdain.

The film may not have great profundity--there is a gentle nod to society's changing sexual mores in the storyline of gay butler Thomas Barrow (Rob James-Collier) but creator and screenwriter Julian (Gosford Park) Fellowes ensures that the movie has a cinematic structure, impeccable period details and a story paced for one instalment rather than a full season and is still packed with incident.

Most of all this is a polished movie, enabling us to catch up with a well-loved community of characters and providing another chance to step into history- and into the gorgeous grounds of Downton Abbey.

Downton Abbey is in cinemas nationwide from Friday 13 September.