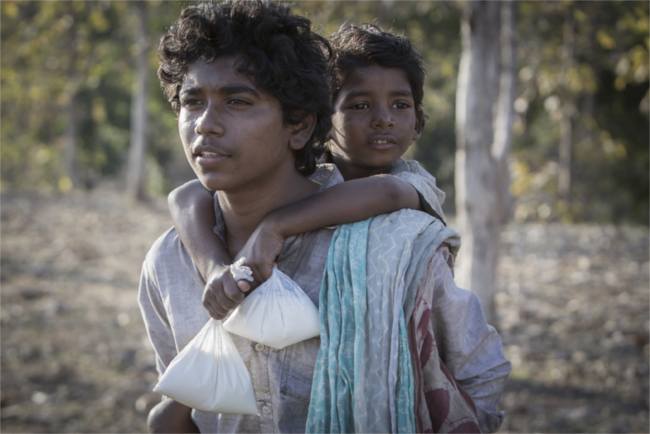 A rousing tribute to the tenacity of the human spirit is provided by Garth Davis in his uplifting feature film debut Lion, adapted from Saroo Brierley’s memoir, A Long Way Home, which proves that fact can be more incredulous than fiction.

The story is set in 1986 before social media, smartphones or Google. As a boy Saroo was a cheeky and adventurous fiver-year-old, living with his hard-working mother and siblings in an impoverished, rural township in India. One night when out with his older brother looking for work, he gets separated from him, and falls asleep in a stationary train carriage, only to wake to find it moving, taking him 1,600 kilometers away to Calcutta. Left to fend for himself on the overcrowded streets, Saroo eventually lands in an orphanage and is adopted by a kindly Australian couple. Lively and inquisitive, he soon adjusts to his new life. Twenty five years later, the adult Saroo is haunted by lucid, recurring memories of his past. When he discovered a new technology – Google Earth – he begins an obsessed search for his original family, progressively withdrawing from his adoptive parents and his girlfriend.

With minimal dialogue and skilful editing, Garth Davis and screenwriter Luke Davies convey the Dickensian dimensions of Saroo’s situation and their ability to put us inside the mind of our young protagonist is uncanny. He is small and vulnerable, but also smart and resourceful and even as he is exposed to horrifying cruelty and the cunning of those who prey on such children by presenting themselves as rescuers, he is also a hero on an adventure. The enormous pain of his loss is sometimes mitigated by the excitement of his discovery. You fear for him and also root for him, and mostly you are captivated by his story and the sophisticated simplicity of its telling.

Indeed as a purely emotional experience, the film succeeds without feeling too manipulated or maudlin. Still it isn’t completely satisfying. The shift from the young to the grown-up Saroo demands a shift in the tone and genre that the film doesn’t quite achieve. There isn’t enough of the rough texture of family life or the complications of young love to give the older Saroo a full identity.

Davis, though, draws out sterling performances from Dev (Slumdog Millionaire) Patel as the adult Saroo, Nicole Kidman and David Wenham as his warm, adoptive parents, Rooney Mara as his girlfriend and later his wife and in particular, young discovery Sunny Pawar as Saroo as a little boy, with an unswerving love of both  of his mothers. Just watching him encounter such things as a television or refrigerator for the first time is magical.

This in short, is heart breaking stuff, which is more intricate in its texture and has more narrative twists than most works of fiction, whose stunning cinematography and elegant symphonic score manage to intensify the emotional impact of the universally resonant story.

This film is nominated for a number of BAFTA awards and was recently voted Best British Film of the Year in the Evening Standard awards.