A sobering, beautifully shot film of dashed hopes and inter-generational relationships (directed by Nuri Bilge Ceylan) that implants itself on the mind. Laurence Green reviews. 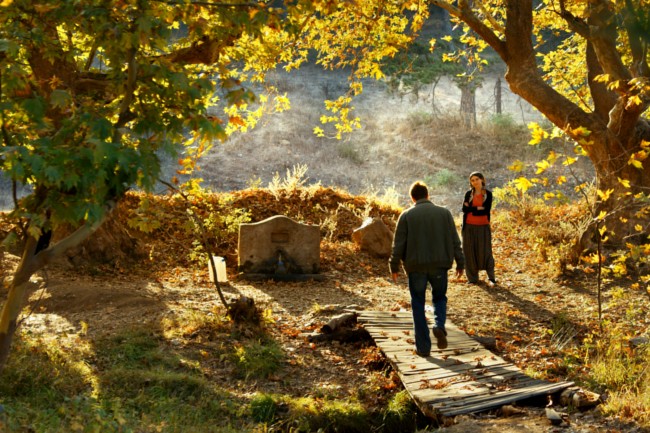 A persuasive portrait of a young writer at odds with his hometown and family is provided by leading Turkish director Nuri Bilge Ceylan in his insightful and profound new film The Wild Pear Tree (ICA and selected cinemas).

Sinan is a young man about to graduate from college but anxiously looking for a way out of the fate that seems mapped for him, following the paternal tracks to become a schoolteacher. Coming home to visit, he finds his father Idris, knee-deep in gambling debts. His mother, Asuman, meanwhile, drowns her bitterness in endless television novellas provided by the Turkish TV channels. Passionate about becoming a writer, Sinan looks for a way to publish his first novel, but his clumsy idealistic pitch fails to obtain any kind of sponsorship, with the result that he has to pay for the publication out of his own packet with money he doesn't have.

This is a sobering beautifully shot film, which gives a new and fascinating twist to the genre of movies dealing with family relations - the confrontation at the heart of the film is between a son and his father deals with much more than the generation gap. Philosophy, religious tradition and ethics are also woven into the fabric of the narrative, while the script reveals a stagnating provincial world of characters all handling their thwarted hopes and inevitable resignations in their own way.

The wry tone of the movie is Chekhovian, detached yet compassionate, subtle but clear, quiet but hugely expressive. Two scenes in particular stand out. One in which Sinan's hard-pressed mother has a moving monologue, confessing that despite all the aggravations of her married life, had she been given a second chance, she would still choose the same husband. The other, which is gut-wrenching, takes place in a paradisiac orchard where Sinan's long-time girlfriend Hatice gloomily contemplates a future she will have no choice but assume.

With its vivid gallery of characters, the cast rise well to the challenge. Particularly memorable are Aydin Dogu Dermikol as Sinan, Murat Cemcir as his father Idris, Bennu Yildirimlar as his mother Asuman and Hazar Erguclu as Hatice.

This is a discursive, over-long, but impressive film that implants itself on the mind.