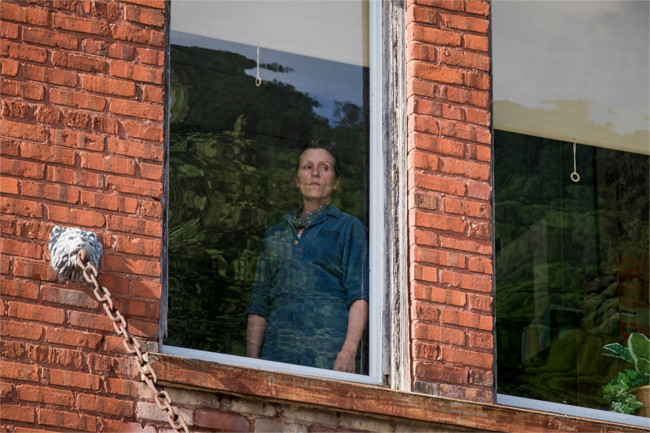 It is not often in the cinema that you find an actor giving a real tour de force but this is indeed the case with Frances McDormand as a mother seeking retribution in Martin McDonagh’s wrenching, blackly comic movie, Three Billboards Outside Ebbing Missouri (released 12 January 2018).

Meet Mildred Hayes (McDormand), a gift-shop manager in small-town Missouri who is grieving over the brutal murder of her only daughter. Six months later and with no leads in the case, she takes matters into her own hands, renting the titular, disused advertising hoardings to challenge the seeming inactivity of Ebbing’s Police Chief Willoughby. The sheriff reacts with surprising calm but Mildred excites the ire of one of his deputies, Officer Jason Dixon, a chronic underachiever. Caught in the crossfire are many of the townsfolk including Mildred’s embarrassed teenage son, her ex-husband, her new suitor and the young businessman who was brave – or foolish – enough to rent her those billboards.

McDonagh’s screenplays are consistently audacious and his sleight-of-hand here is to make the victim’s mother a righteous, nasty women but with great guts, who is just as hell-bent on rebuffing sympathy as she is on getting justice. It comes as no surprise that the role of Mildred was specially written for McDormand, and the resilient, determined, salty-mouthed character gives the actress her best role since Fargo, and she relishes it with vivid, overwhelming power, making Mildred a caustic no-holds-barred character who has been forced into such an unimaginable situation that she copes by careering through life with little regard for rage fragility of others’ feelings about her or the things she’s been forced to endure. At one point Mildred admonishes a ‘well-meaning’ priest who calls on her to request the removal of the billboards with an uproarious analogy comparing the Catholic Church to Los Angeles’ crackdown on crime of the 90’s in the next moment she’s making conversation with a lone doe about whether the world is cruel and there’s no afterlife. There’s pain and anger and brutal comedy, often all at once in every corner of her performance and it’s the kind that will endure over time.

This moral complexity is given by McDonagh to all of his characters from Mildred to Police Chief Willoughby with Woody Harrelson bringing a lot of nuance and texture to the role, to his blundering sidekick Dixon, with an impressive Sam Rockwell revealing hidden depths, and to the more marginal players, whether it’s John Hawkes as her abusive ex-husband, or Peter Dinklage as a local with eyes for Mildred.

But make no mistake – it’s McDormand’s blistering performance that dominates this excellent film. No wonder that she is emerging as the favourite for this year’s Best Actress Oscar.