Asparagus: A Rite of Spring 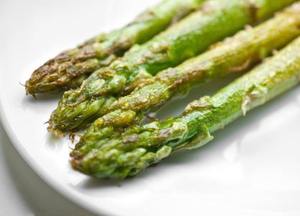 Asparagus has been a prized food since ancient times. The Greeks ate wild asparagus and the Romans cultivated it in their gardens. But asparagus did not become a big crop in North America until the end of the 19th century. It has been popular ever since. In addition to its delicate taste, asparagus is high in vitamins A, B and C, and a source of iron and potassium.

Asparagus can be more than a side vegetable. It can be served as an appetiser, a soup, or over pasta. Asparagus salad is another good showcase. In the recipe below, a tart, lemony dressing complements the asparagus without obscuring its natural flavors.

Try salads made with dark leafy greens and vegetables such as asparagus, broccoli, cauliflower, sweet or hot peppers, carrots, mushrooms and courgette. The vegetables could be raw, lightly steamed, grilled, or even leftover from a stir-fry.

You don’t need to have a salad every day. But scientific evidence suggests that a mostly plant-based diet is best for preventing both overweight and chronic diseases. Asparagus Salad with Lemon-Soy Sauce would be a good part of such a diet.

Shop for firm, smooth, bright green stalks with tight tips. Wrinkled spears are dried out. Asparagus is often sold in bundles bound with rubber bands. Take the bands off before storing; they make the spears sweat and spoil more quickly. Since they are grown in sandy soil, rinse the tips well. Asparagus can be kept for three or four days refrigerated. Trim the stems and store asparagus standing upright, like flowers, in a tall glass with about an inch of water, loosely covered with a plastic bag.

Before cooking, trim spears by bending stalks until they break off, usually at the woody, inedible part of the spears. Use stalks of a uniform thickness so they cook evenly.

Steam asparagus and 8 scallions in a steam basket over boiling water (or in the microwave, with a small amount of water) until crisp-tender, about 5 minutes. Rinse with cold water to stop the cooking and set color. Drain and cool.

To make the dressing, heat oil in a small saucepan over medium-high heat. Add ginger and stir until it begins to color. Add half the minced scallions and cook a few seconds. Add broth, vinegar, soy sauce and sugar. Set aside.

Just before serving, place the remaining minced scallions in a large bowl. Add steamed asparagus and scallions. Bring the dressing to a boil over medium-high heat. Let boil 30 seconds. Gradually stir in pepper and lemon juice, tasting, to achieve an appealing tart and peppery flavor. Toss the vegetables with the dressing.

This recipe is reproduced courtesy of the The American Institute for Cancer Research (AICR).  For further information visit: http://www.aicr.org/