The magic of deep-shaded gardens

Having a large tree casting its shadow across your garden isn’t the end of the world according to expert Maxine Farmer. 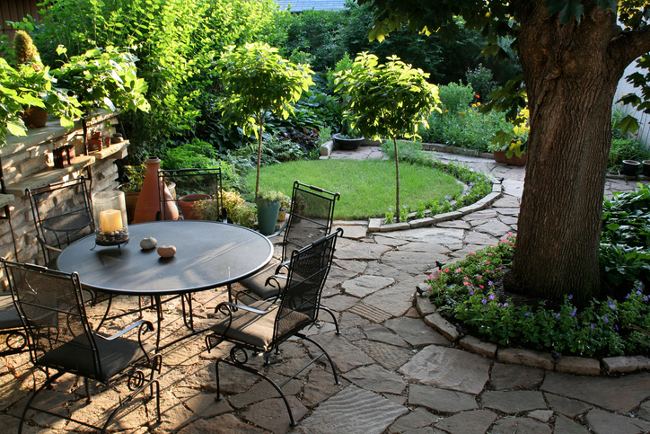 When we first moved to this cottage, I despaired of the neighbour’s huge ash tree that cast shadows over so much of our garden.  Yet now, I’d be devastated should that majestic tree ever be cut down, because I’ve learnt to love the magic of deeply shaded garden.  Of course, I wouldn’t want the whole plot to be like this, but I love the dramatic contrast between the sunny open spaces and the bosky, mysterious area that meanders under the tree, where you can’t quite see where the end lies so the visitor is inevitably tempted to explore further into the dark green depths.

Nor is it a huge space, but it has become one of my favourite corners of the garden and this is why when gardening clients complain to me about how challenging deep shade is, I tell them that it is actually a great opportunity.  True, the range of suitable plants is pretty limited compared to a sunny border, but deeply shaded areas take on a personality all of their own.

Before we talk about plants, I’d like to briefly touch on other ways to create interest in the shaded garden.  For instance, a mirror strategically placed in a ‘dead end’ reflects light back and creates an illusion that the boundary does not really end there. Growth in deep shade can often be low-growing, so it can make a great setting for statues and other garden ornaments:  I love the surprise of turning a corner and finding an unexpected object, perhaps a tiny water feature, a willow sculpture or even a mossy seat.

I also wouldn’t worry too much about trying to lighten the shade: in fact, we’ve found that it works quite well to go the other way.  Under the previously mentioned ash tree, we’ve created a series of inter-connecting wooden pergolas, over which yet dense climbers have become established.  When garden visitors take the first step down one of the paths leading to this almost spooky space, their way is only lit by the whirling dream-catchers that snag occasional drops of sunlight that make it through the foliage. 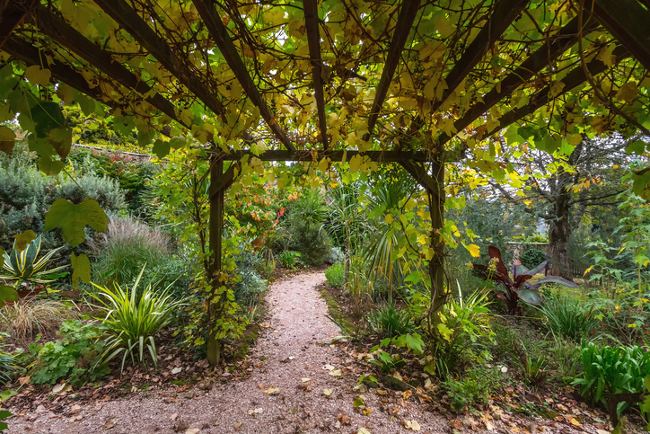 So far so poetic, but let’s get back to the green stuff and here I do have to be honest and say that deep shade plants are often quite slow-growing, so don’t expect instant results, unless you’re prepared to invest in and then water large specimens.  Let’s start with the backbone plants, because those are usually the biggest challenge.

Good shrubs for deep shade include Cotoneaster Cornubia, which is arguably a small tree.  It is more or less evergreen and benefits from sharp pruning of its top stems, otherwise it becomes very leggy in its search for light.  It is not a very exciting shrub, but where nothing else grows – the darkest, densest, driest shade – this plant will do the job.  Good old evergreen laurel comes a close second, as does Mahonia x Media.  I grow all three of these shrubs together to create a dense dark green backdrop all year round.  Aucuba Japonica – the yellow-spotted laurel – is also tolerant of deep dry shade.

Smaller evergreen shrubs include butcher’s broom Ruscus Aculeatus, the glossy graphic leaves of which are beloved of flower arrangers, and the Christmas box, Sarcococa hookeriana var. Humilis, which has deliciously scented flowers in midwinter.  I’ve also found that most Spirea – which are largely deciduous small to medium sized shrubs, often with gorgeous flowers and sometimes variegated foliage – will also tolerate quite dense amounts of shade. 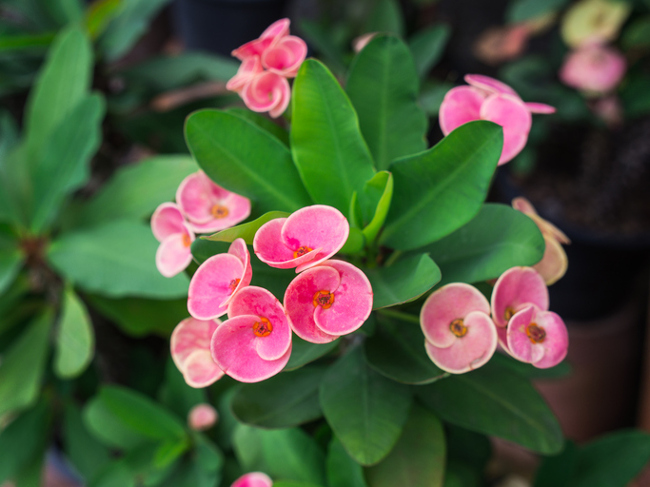 Many Euphorbias are tolerant of shade, particularly Euphorbia Robbiae, which positively relishes being in the semi dark.  For really low-growing shrubs, take a look at Tiarella, Pulmonaria and Pachysandra, which between them, will create a dense carpet of undergrowth.

Good climbers include the golden hop, Humulus Lupulus, which adds a touch of brightness with its emerald green foliage.  The only drawback is that it can be invasive and is a martyr to various leaf-eating insects.  Slower growing but probably hardier in the long run is the evergreen honeysuckle Lonicera Henryi , which will not flower prolifically in deep shade, but will reward you with a few blooms and, more importantly, twining ‘sleeping beauty’ like tendrils covered in dark green leaves.  In our own deep shade, we’ve also had considerable success with Clematis Tangutica ‘Bill Mackenzie’, which flowers in late summer and has pretty nodding yellow bells.

There are quite a few flowering plants for deep shade and although perhaps not as showy as their sun-loving cousins, they have much to offer.  At this time of year, one of my favourites is Chelone Obliqua, a perennial of about eighteen inches high and bearing mauve flowers which because of their unusual shape, give the plant its common name of ‘Turtlehead’. 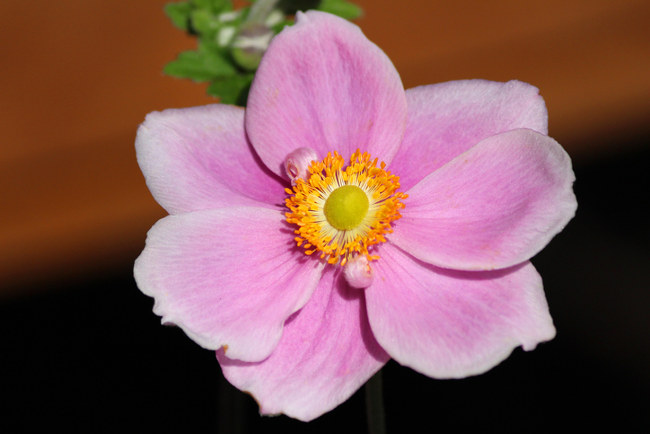 Other late flowerers include Liriope – similar to grape hyacinths but just not flowering in spring – and Anemone Hybrida, which is available in shades from hot pink through to pure white.

Cimicifuga has for some years been a fashionable and widely sought-after plant.  Rightly so:  give it some shade and space and it will reward you with its wonderful feathery plumes in late summer and early autumn.  Unlike all the other plants mentioned so far – all of which will tolerate quite dry shade – cimicifuga fares best in soil that is moisture-retentive.

Hardy geraniums will grow just about anywhere in my experience and a particularly good one for dark shade is Geranium Phaem, the ‘Mourning Widow’, with its blooms of deepest purple in late spring.  If the dense shade is caused by a deciduous tree, then the leaf canopy may let in more light in the spring months.  If so, then I am a big fan of woodruff, Gallium Odoratum, which unlike some other spring flowerers, does not leave an ugly mess of dying leaves once it has ceased flowering.  Even once its starry white flowers have faded, its neat rosettes of bright foliage persist.

These are just some of the plants that will earn their keep and I hope win your heart in the deep shade garden.  For further reading, I recommend Alan Titchmarsh How To Garden: Garden in the shade or if you can get hold of a copy, even better is Beth Chatto’s The Shade Garden: Shade-loving Plants for Year Round Interest.

Garden writer and consultant Maxine Farmer writes specialises in writing about garden challenges and people who have fascinating plots.  She has written for The Daily Telegraph, Housebuilder & Renovation, and the RHS’ members magazine, The Garden.  Maxine has also published ‘Wet and Dry’, a book of advice about helping gardens to  survive the extremes of hot summers and wet winters.