What is good cholesterol?

Far from being a health bogeyman cholesterol plays a crucial role in the healthy function of your body. Dr Sarah Brewer explains the difference between good and bad cholesterol. 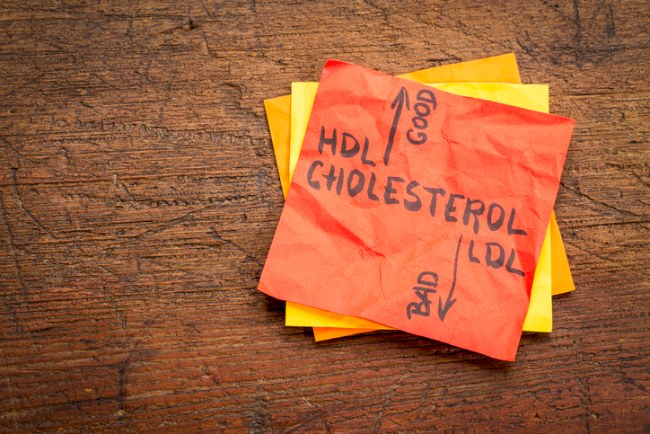 Cholesterol is waxy substance that is made in the liver and released into the circulation for use by cells. Some cells can make their own cholesterol when needed, too.

Despite its dodgy reputation, cholesterol is vital for health as it is used to make hormones, vitamin D, bile acids and to maintain healthy cell membranes.

As cholesterol is insoluble, it is transported within the circulation bubble-wrapped by transporters known as lipoproteins. These lipoproteins are made in the liver and come in a variety of forms, with particles of varying size and density, which all have different functions.

Low density lipoprotein (LDL) binds to cholesterol to transport it from the liver to the cells, and was originally referred to as ‘bad’ cholesterol, as it is found in the plaques that cause arteries to become hardened and furred up (atherosclerosis).

High density lipoprotein (HDL) binds to cholesterol to transport it from the tissues back to the liver for processing, so HDL-cholesterol is usually referred to as ‘good’ cholesterol.

Intermediate-density lipoprotein (IDL) is formed from the breakdown of VLDL, once it has released its triglycerides, and can then absorb more and more cholesterol until it becomes LDL cholesterol. IDL-cholesterol is also associated with furring up of the arteries.

Lipoprotein(a) is another LDL-like particle which contributes to furring up of the arteries.

As the complicated interaction between these different forms of lipoprotein and cholesterol has become unravelled, the focus has shifted away from LDL- cholesterol as bad cholesterol. Essentially, every lipoprotein that isn’t HDL is now considered a potential risk factor for cardiovascular disease.

HDL-cholesterol remains the ‘good’ form of cholesterol as having a relatively high level is associated with a lower risk of heart disease and stroke.

The sum total of all the other forms of cholesterol – collectively known as non-HDL cholesterol - are now referred to as ‘bad’ cholesterol.

Non-HDL cholesterol is a better, more accurate predictor of the future risk of cardiovascular disease (heart attack and stroke) than low density lipoprotein (LDL) cholesterol. As a bonus, you don’t need to fast before having a blood test to measure non-HDL cholesterol – no more early morning blood tests with a rumbling tummy.

This total/HDL ratio is used to estimate your cardiovascular risk, along with other health and lifestyle risk factors to assess your qrisk3 score. https://qrisk.org/three/   Based on this calculation, NICE now recommends lipid-modification treatment (usually a statin) for people whose risk of having a heart attack or stroke over the next 10-years is 10% or greater.

Does high cholesterol have any symptoms?

Many people have high cholesterol without realising it and only discover it when they have a blood test. The NHS

Are there any supplements I can take?

Plant sterols (eg 800mg three times a day) lower cholesterol levels by blocking cholesterol absorption in the gut. A sterol rich diet can lower levels of harmful LDL-cholesterol by around 15% . Because statins work in a different way to plant sterols, the two can be used together to lower cholesterol levels even further. Adding sterols to statin medication is more effective than doubling the statin dose. Try Healthspan new YoGo, a new way of taking supplements in an instant yogurt-style drink with 1,500mg of plant sterols available in natural and peach flavour and no fishy taste at all.

If your Doctor has prescribed statins to help reduce cholesterol you might also want to try taking a supplement Q10 supplement or Ubiquinol because statins reduces your synthesis of both cholesterol and co-enzyme Q10 which may contribute to the muscle-related side effects that some people experience when taking a statin. In fact, taking a statin can halve circulating levels of co-enzyme Q10 within just 2 weeks.  Taking co-enzyme Q10 supplements or Healthspan Ubiquinol (body ready form which is equivalent to 280mg of CoQ10 g) which helps to maintain blood levels of this important muscle nutrient while taking statin drugs.