Anne received life-saving treatment for bowel cancer after she was diagnosed following a routine screening test. 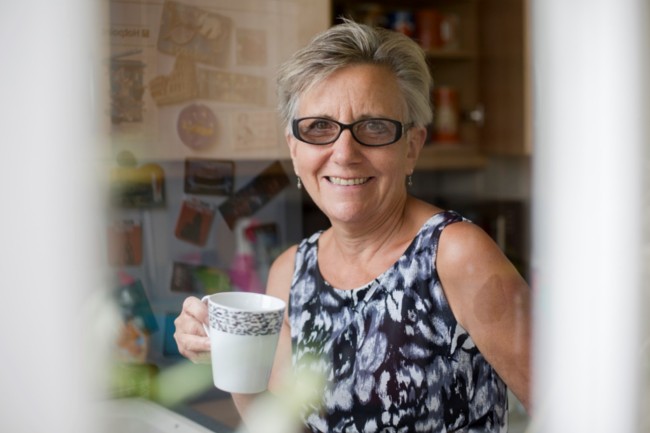 On the morning of Anne’s 60th birthday she received an unusual package from the postman, but not one she was expecting. It was an NHS at home bowel screening kit which looks for early warning signs of bowel cancer. Anne’s Aunt died from the disease in the 1980s so she felt compelled to take the test. Results revealed abnormalities so Anne made a follow-up appointment, in which the consultant needed to conduct a colonoscopy the following week. Sadly, this led to the news no one wants to hear – Anne had bowel cancer.

Seeking treatment at the local hospital, Anne underwent an operation and 6 months of chemotherapy to stop the cancer cells spreading. With a depleted immune system, it meant that she could not return to her day job as a teaching assistant, in case she picked up an infection. Throughout the treatment, Anne’s husband and sons were her vital support system. Anne finished treatment in March 2016 and is now looking forward to the future.

Research has progressed at an accelerated pace over the last 40 years and is paving the way for people like Anne to beat cancer, unlike her Aunt back in the 1980s. Advances in research, treatments and cures are becoming a reality thanks to the amazing progress being made by scientists funded by Cancer Research UK. Anne explains,

It’s thanks to research carried out by Cancer Research UK that doctors know what chemotherapy drugs work the best. I think about how incredibly fortunate I am every day. Had the screening test not dropped through the letterbox, my cancer may not have been treatable and I may not have been here today.

Without cancer research, people like Anne may not have had access to the treatments required to identify the cancer and stop it in its tracks. This research is in large part thanks to the gifts left in Wills to Cancer Research UK. Over a third of funding for our life-saving research is received through gifts in Wills, helping more people like Anne survive cancer.