London designer Rose Uniacke reveals how she rescued an indoor garden offering advice on creating your own winter garden. 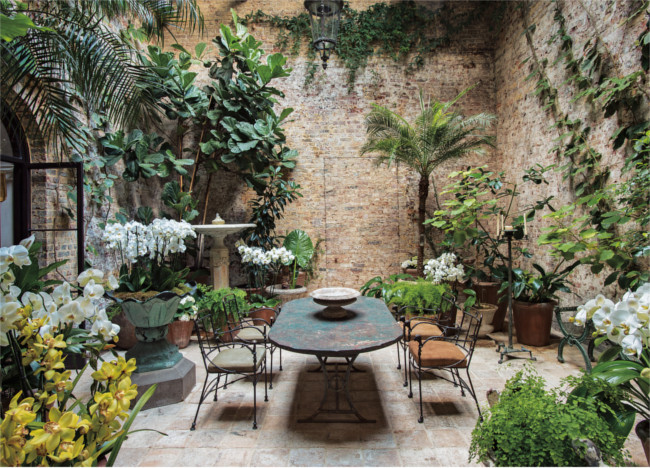 Famous for her glamorously minimalist interiors, Rose Uniacke rescued an unloved indoor gallery in her nineteenth-century mansion, creating a light-filled conservatory that evokes an era when Victorian plant hunters roamed the globe in search of the exotic.

The Georgian Revival–style villa that London interior designer and antiques dealer Rose and her husband, film producer David Heyman, bought in 2007 had fallen on unfortunate times. Divided into apartments, it had an ugly staircase, fire-door partitions—and an odd domed gallery in the centre of the main floor. But Uniacke (who trained as a furniture restorer, gilder, and specialist in paint and lacquer finishes before opening her eponymous shop on London’s premiere antiques row on Pimlico Road) was up for the challenge. Known for the serenely restrained interiors she creates for clients including Victoria and David Beckham and perfumer Jo Malone, Uniacke hired Belgian minimalist architect Vincent Van Duysen to reimagine the space.

And thus was born the luxuriously rustic conservatory that Uniacke calls the Winter Garden. The first step in transforming the gallery was to remove an inferior 1970s glass roof from the classical domed ceiling. “Suddenly the ceiling seemed vastly higher,” says Uniacke. “It radically changed the feel of the space. The proportions of the room became fabulous.”

Discovering that the original wooden rafters were still in place, she had them wire-brushed clean and left them exposed. Layers of plaster were stripped from the walls, revealing beautiful bare brick that Uniacke left raw. She furnished the space with a mix of antiques from her shop.

To choose plants for the indoor garden, Uniacke brought in Tom Stuart-Smith, London’s landscape designer of the moment. Stuart-Smith – who also designed an outdoor garden space on a walled terrace along one side of the house – was “in charge of shape and planting and the mechanics,” says Uniacke.

Stuart-Smith wanted to make the space as relaxed and informal as possible, given its grand scale. “All the planting was scattered around with apparent abandon in a variety of containers,” he says. A mix of orchids, tropical plants, and climbing vines creates a room that Uniacke calls “totally unexpected.” 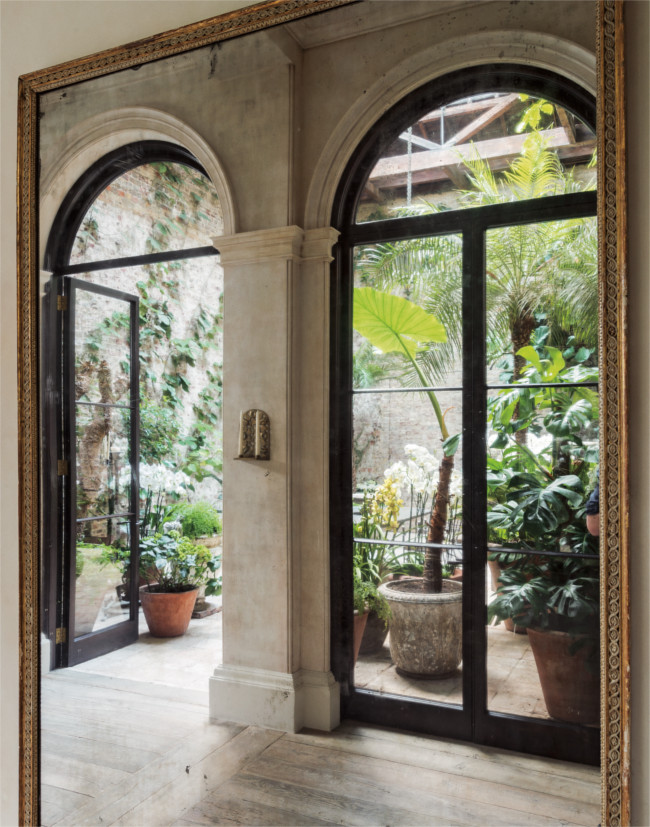 The heart of the matter

The garden conservatory is where Uniacke and her family entertain, eat together, read, and arrange flowers. The glass in the doors was specially made to copy the wavy, imperfect panes found in old Georgian houses. “It’s essential to make all the details interesting,” says Uniacke.

Most of the furnishings came from Uniacke’s shop or were discovered in her travels (she found the terra-cotta floor tiles in a reclamation yard in France). Stuart-Smith supplemented the collection with terra-cotta from Italian Terrace, a British company whose designs are handmade in Italy. A Carrara marble fountain is inscribed “The Gift of CC Walker Esq. 1885.” Says Uniacke, “The sound of water makes all the difference.” For a less formal look, the fountain was deliberately set off-center.

A vintage French steel conservatory table is the site of frequent family meals. Uniacke calls the table, with its patina of green paint, a “wonderful workhorse.” Patinated bronze chairs, designed by a Swiss sculptor and furniture designer, date from the 1950s. A dwarf palm (Phoenix roebelenii) lends a tropical air, as does the small-leafed Ficus pumila (creeping fig) climbing the wall between the doors.

Uniacke also has an outdoor garden, a walled terrace along one side of the house. Because it was very low and disconnected from the house, Stuart-Smith lifted the level by 3 feet. He paved the floor with old York stone (sandstone quarried in Yorkshire) and flanked the doorway with two euphorbia shrubs. Euphorbia x pasteurii is a “new-ish variety,” with yellow, honey-scented flowers in late spring.

A mix of different planters and types of foliage gives this space an informal air.  A mature olive tree thrives in a deep terra-cotta pot. Against the brick wall, Stuart-Smith planted camellias, southern magnolia, and evergreen Eriobotrya shrubs to create solid texture and enclose the space with greenery.

Gardenista, edited by Michelle Slatalla and with images from Mathew Williams, is a hardback garden design manual inspiration and expert advice: there are in-depth tours, step-by-step guides and easy-to-implement design ideas. The book is available on Amazon