Darth Vader actor, Dave Prowse MBE, attended the launch of a new partnership between Prostate Cancer Charity and Betfair which looks set to raise £150,000 to help the fight against prostate cancer and the families of those suffering from the disease. 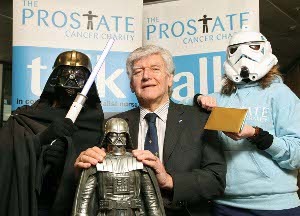 Dave Prowse spoke candidly about his experiences with the disease at the event, which thanks to early detection he successfully battled last year.

The deal with Betfair will see staff take part in a number of fundraising events from marathons to skydives as well as enjoying Movember, the sponsored moustache growing event which takes place in November each year.

Dave Prowse commented: "The force is strong with Betfair as they look set to raise an incredible amount of money for The Prostate Cancer Charity this year. It was a pleasure to attend the launch today and to meet so many of the Betfair staff. Having been treated for prostate cancer myself, I know how important it is to raise awareness of this disease, which this partnership looks sure to do."

There are 250,000 men living with prostate cancer in the UK and every penny that Betfair raises will go towards improving the lives of these men and their families affected by the disease.

Georgina Corbett, Corporate Responsibility Manager for Betfair, said: “Following a fierce staff vote, Betfair is thrilled to announce The Prostate Cancer Charity as our Charity of the Year 2011. We feel that there are natural synergies between our business and the charity and we hope not only to raise vital funds, but increase awareness, particularly among men, of this common cancer.

Head to the Betfair or Prostate Cancer websites to learn more and see what you can do.

Good luck with all of your fundraising events over the year Betfair, may the force be with you.