Posted on: 04 February 2011 by Gareth Hargreaves

50connect considers the new MINI design concept that made its debut at the North American International Auto Show (NAIAS) in January. 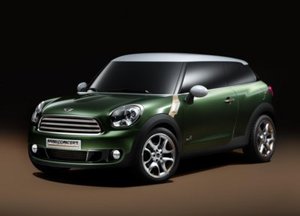 The MINI Paceman Concept is described as a 'Sports Activity Coupé' but it hints that BMW is chasing the high end buyers at the expense of the 'bread and butter' small cars market.

MINI claims this is 'a new category of car combining the fundamental MINI DNA'. The marketing spiel is all dynamic capability, individual design and cutting edge technology ... and maybe it is, but at the end of the day we're price conscious and more interested in safety features and on-road emissions.

The Paceman certainly combines the classical MINI concept with the defining features of the MINI Countryman and the style of a coupe. Unfortunately, it is also a bit too macho and looks like the engineers have deliberately bulked up to appeal to young men.

The Paceman retains the familiar MINI family frontal appearance but then gets the steroid treatment with large headlights with chrome surrounds and pronounced front wings and distinctively contoured bonnet.  The radiator grille is essentially the same as that of the Cooper S Countryman barring additional air intakes in the bumper to deliver improved brake ventilation and the incorporation of new deep set fog lights.

From the side the Paceman features remodelled front wing and side indicators that guide the eye down to the unique design 19 inch front wheels. This rugged and sturdy design element is complemented by dark wheel arch surrounds with matching side skirts that emphasise the masculine, sporting nature of Paceman.

A new interpretation of the classic coupé design has given the MINI Paceman Concept a distinctive coupé tail that complements the sporty character of the car. New rear lights positioned at the outer edges of the broad, muscular rear wings emphasise the wide track of the rear axle.

The interior of the MINI Paceman Concept deliberately draws on MINI’s unique and distinctive design language and adds a refreshing, yet obviously male oriented, new look. Behind the study’s masculine exterior lies an elegant yet sporty interior environment that exudes premium quality and funky design. The instrument panel of the MINI study is defined by its distinctive, concave forms and the sporting yet functional impression it creates.

The model’s sports performance and punch may be enough to put off some potential buyers, but you can rest assured it carries the characteristic on-road balance and poise associated with the BMW stable.

While only at concept stage it is clear that this car could soon be in production given the covetous looks and reviews it has received. And even though it is a pretty meaty on-road performer aimed at the younger end of the age spectrum, maybe prohibitive insurance premiums and a price tag will lead it out of the clutches of the boy racer into the caring arms of one careful lady owner.