Nissan Micra goes back to basics! 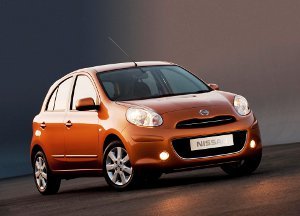 Image enhancing ‘designer’ cars like the Qashqai, Juke and Cube have been good for Nissan and boosted both its credentials and the bank balance, writes motoring correspondent Adrian Foster. But, the manufacturer hasn’t turned its back on ‘bread and butter’ vehicles and a new version of the Nissan Micra has arrived in UK showrooms with a recession-busting price ticket of a shade over £9,000 on the road.

The bubbly, cute styling of the previous Micra has been replaced by a more conservative look on the new version. Nowadays, if you want a funky Nissan you will have to head for the Juke or the Cube. Indeed, the previous Micra's blobby bumpers and exaggerated lines looked as though they had been styled in Play-Doh rather than on a designer’s CAD system. But that didn’t stop those early superminis from flying out of showrooms like bats out of hell.

The latest version is part of an ever growing group of cars being described as 'global' by their manufacturers. Loosely translated, this new buzz word means that it is going to be sold in the same spec and style in 160 different countries around the globe, so it has to appeal to a lot of different customers, explains Nissan. Unfortunately, so strong is the current market that any whiff of rationalisation is too readily interpreted as cost cutting... 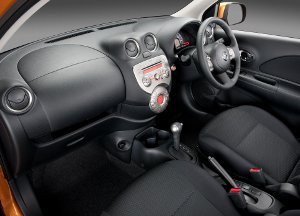 So, that's enough about the exterior. Inside, it's a bit more adventurous although the colour you pick makes a big difference. Surprisingly roomy, the previous Micra was already pretty well-packaged but this one is better. There's certainly enough room inside for four adults, the seats are comfortable as well, but drivers can find it hard to find their perfect position because the steering wheel adjusts for height only and entry-level versions miss out on seat-height adjustment too. Build quality seems solid enough, but the hard interior plastics feel low-rent, even for a budget supermini. However, the dash is well laid out and easy to use.

It’s worth taking a little time out to explain the Tekna’s Parking Slot Measurement (PSM) system. This operates at speeds below 15mph and informs the driver as to the wisdom of attempting to park in a space it senses is "OK", "Difficult" or "Not Advised", the parameters being determined by whether you choose the Amateur, Normal or Expert mode. PSM at least shows that Nissan, while not aiming either for high quality or excitement with the Micra, has certainly been prepared to throw technology at it. 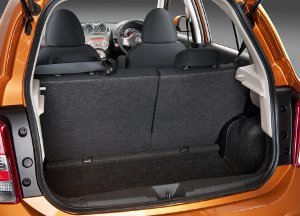 Although rear seats can't be moved back and forward, as they used to, there is a commendable amount of leg room and space for adults with long legs. On higher-specification models they can easily be folded and tumbled forward - and secured by being hooked to the front headrests - to give a flat load area. Luggage space when all the seats are up is 265 litres, which most rivals can equal or better, but in two-seater form the Micra manages 1132 litres when loaded to the roof, which is outstanding. It's available only as a five-door, so access to the rear seats isn't a problem, and the 265-litre boot is big enough to swallow a few bags of groceries.

From launch, there's only one engine, a 1.2-litre three-cylinder petrol unit with a maximum output of 79bhp. The resulting performance figures of 106mph flat-out and 0-62mph in 13.7 seconds are not going to give granny a heart attack, but Nissan has never ever felt the need to put a seriously fast Micra into production and there seems to be even less reason to do so now. With the standard five-speed manual gearbox, the Micra has combined fuel economy of 56.5mpg and CO2 emissions of 115g/km, so it's exempt from the first-year VED payment and will cost you £30 annually to tax thereafter. Although there's not going to be a diesel, Nissan says it will extend the choice later this year by introducing a supercharged version of the petrol engine, which will not only produce more power (97bhp) but emit only 95g/km of CO2 on the official test cycle, which means you don't have to pay any VED at all.

The non-supercharged 1.2 comes with a manual gearbox, or a CVT automatic adds £950 to the price and adversely affects the performance, fuel economy and CO2 emissions. But is nevertheless worth considering because, by removing the manual's wobbly gearchange, it makes the Micra seem more of a quality car.

What did we think? 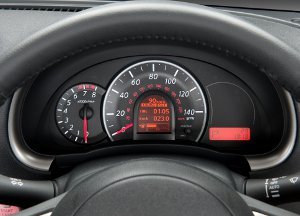 The fourth-generation Nissan Micra, with its low purchase price, group 3 insurance and good fuel economy should be popular with buyers on a budget who want something different from than the ubiquitous – and more expensive - Ford Fiesta and Vauxhall Corsa. But somehow, the styling of the new version seems to have taken a back seat at the expense of cost cutting and this appears evident in the quality of the new car’s interior too.

Previous Micras have all satisfied the needs of those who want nothing more than a small, reliable car to potter around town in. It is fair to say that the Micra, in all its guises, has been a hit with the UK market but can this latest offering continue to keep the British small car buyers happy? Only time will tell.

On the road price: From £9,250 OTR
For information visit: Nissan

Do you agree with this Article? Agree 100% Disagree 0%
You need to be signed in to rate.