Will the real St George please stand up?

Find out how much we really know about England’s patron saint.

Nobody knows too much about the real life of St George. So many legends
surround him that it’s impossible to separate the man and the myth.
However a generally agreed story has been handed down through the
centuries.

St George was not one of the knights of the Round Table. He wasn’t
English, and probably never even visited England. He was born and raised
in the Middle East, somewhere in what is now Turkey, around the end of
the third century AD.

George became a Roman army officer. It was during Emperor
Diocletian’s reign that he served in the army, and he rose through the
ranks to captain level.

The Roman Empire was still pagan at the time, so as a Christian
George left the military when Rome ordered its soldiers to persecute
Christians. He spoke out against this action and was imprisoned and
tortured. However he would not renounce his faith, so the Romans
beheaded him.

His execution took place on 23 April, 303 AD, in Palestine. Sadly
George didn’t have much chance to live life to the full as he was only
in his 20s or 30s.

This martyrdom is why the Church awarded him a sainthood. The
Catholic Church downgraded celebration of his feast day to optional in
1969, but Eastern and Oriental Orthodox Churches venerate him highly.

Many countries other than England have adopted St George as their
patron saint, including Georgia, Serbia, Montenegro, Bulgaria,
Lithuania, Greece, Malta, Palestine, Ethiopia, Canada and Portugal.
Aragon and Catalonia in Spain, and cities including Moscow, Ljubljana,
Istanbul, Beirut, some in Italy and Germany have also adopted him.

He’s patron saint of Freemasons, Scouts, soldiers, farmers, horse
professionals, and those with syphilis, leprosy and skin disease too.

With so many international connections, it’s hard to see why George
was chosen to represent England. The cult of St George existed in the
country for centuries, but worship of the chivalric knight really took
off after the Crusades.

Crusaders coming back from the Middle East brought the tale of George
and the Dragon to England. The story, in which the saint slays the
Dragon and saves the Princess from being sacrificed to prevent the beast
attacking the city, probably began as a pre-Christian legend.

In 1348 Kind Edward III founded the Order of the Garter, with George
as its patron saint. He dedicated Windsor Castle’s chapel to the saint,
where the Garter Day ceremony still takes place annually.

Thus George became patron saint of the English monarchy and its army.
Soldiers wore the sign of St George, a red cross on a white background,
now flown at England football matches and which forms part of the Union
Jack. This veneration of George spread to the whole nation after the
battle of Agincourt in 1415.

It is perhaps the world’s most famous playwright who cemented
George’s connection with England in the minds of the English. As well as
writing Henry V, in which England’s king rallies his troops at
Agincourt with, “Cry God for Harry, England and Saint George”, William
Shakespeare was born and died on 23 April, in 1564 and 1616.

So these days England has more than one reason to remember 23
April. 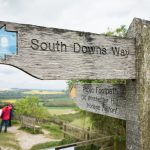 Next Story
Walking: Highlights of the South Downs Way – pt 2